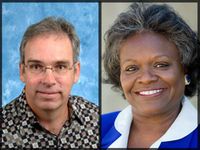 The Legal Intelligencer, Widener Indemnifying Students Who Complained About Professor:

The two Widener University School of Law students named in a defamation suit by former professor Lawrence J. Connell are not only having their legal costs picked up by the school, but Widener has also agreed to pay the tab if the students are found to have defamed Mr. Connell and a jury hands up a judgment against them. ...

"The university has both an implicit legal and moral obligation to investigate such charges and defend and indemnify students who bring these types of charges in good faith," said Widener spokesman Dan Hanson in an interview. "Failing to do so would not only have a chilling effect on any students who may consider filing such complaints in the future, it would be counter to the university's legal responsibility to protect students from retaliation under such circumstances." Mr. Hanson said Widener is obligated to protect the students under multiple federal statutes including Title VI of the Civil Rights of 1964, and Title IX of the Education Amendments of 1972.

Although the statutes do contain strong language prohibiting retaliation in an educational setting, there is no specific language requiring an institution to either cover attorney fees or indemnify students who feel they have been retaliated against.

Mr. Connell was placed on administrative leave last December after the students complained that he made offensive statements in reference to women and minorities in his spring 2010 criminal law class. The students claimed that he used a hypothetical scenario that involved the murder of Widener Law Dean Linda Ammons, a black woman....

In June, Mr. Connell appeared before a panel composed of three Widener administrators. The panel released a 52-page decision exonerating Mr. Connell of all but one of the charges. Mr. Connell was cleared of four charges of racial harassment in the classroom, two specific charges of sexual harassment and one charge of retaliation by seeking to take the depositions of two students who eventually ended up in a civil defamation lawsuit.

Listed below are links to weblogs that reference Widener Indemnifying Students Who Complained About Law Professor:

If the accusations were made in good faith, the defamation suit would not succeed. Far from protecting students who make good faith accusations, in reality they are subsidizing students who make bad faith accusations. But this is not surprising given Dean Ammons scandalous and partisan conduct so far. How can Widener tolerate this contemptalbe excuse of a dean. Haven't they ever heard of the saying, if you are in a hole, stop digging? The only conclusion I can come to is the entire Widener administration is just as corrupt as dean Ammons. Any alumni that still supports this loser of a college can only justly doing so if they are as idiotic of a leftist as dean Ammons.

"Incentives matter and Widner's creating the wrong incentives."
You mis-consider the behaviors Widener's administration wants.
.
Mr. Connell has the "wrong" skin color, the "wrong" XY genetics, and (probably) the wrong political thoughts and therefore he must be punished and his kind discouraged .. all in the name of "diversity", "tolerance", and "fairness", of course.
These students have helped further those ends and therefore their behavior must be encouraged with the proper incentives.

I don't understand the defamation claim. He admits to stating the hypos that the students found offensive. Is their characterization of these hypos as "racist" or "sexist" defamatory? That's clearly just an opinion. Is calling people racist or sexist is defamation? I seriously doubt it.

Oddly enough, Widener did not find an obligation to investigate such charges and defend and indemnify faculty members who were accused but exonerated of these types of charges.

Probably because Widener was, in fact, the instigator of such charges.

I suppose it's not allowed, but really, should the court find in favor of the plaintiff, punitive damages should be set high enough to cause significant harm to the defendants--and if Widener is totally indemnifying the students, that means enough to hurt Widener as an institution. Won't happen, of course.

I would have no problem with Widener helping the students with defense costs, even picking up the whole tab, but paying their damages is just to incite future bad behavior by any student who wants to create a stir for whatever reason, as long as it's an administration-approved stir.

Widener impresses me as a bunch of morally and intellectually corrupt idiots at all levels. I can't imagine why anyone would hire from there.

Generally in a Civil Society, we start at A and work our way slowly up to E, if needed. In a _______ Society, they seem to start right at E and go up.

That the Dean is volunteering to pay the legal fees of and judgements against the students will help Prof. Connell's defamation and contract cases if it is admissible as evidence, since it supports the theory that they are not sincere complaints but rather were "planted" by the Dean.

I suppose that would make a good law school exam question.

"... Widener has ... agreed to pay the tab if the students are found to have defamed Mr. Connell and a jury hands up a judgment against them."

It would be "chilling" to be personally liable for damages if students are found to have defamed their professor? That's not a bug, it's a feature. Society wants its members to think twice before making defamatory remarks. That's one of the reasons we allow people to be sued for defamation. Widner's indemnification of the students is not necessary to prevent a chilling of good faith allegations. Widner's indemnification, instead, encourages the bringing of defamatory charges.

I wonder if the lawyers representing Widener in this case are Windener graduates? It would be amusing if they were not.

Somehow, I suspect that Jennifer Perez and Nadege Tandoh are going to find the legal employment world a little less accepting of their actions.

(Of course, I'm kidding. No lawyer will ever actually decide not to hire these geniuses based on their lack of judgment, because no HR department will even get past the "Widener" on their resume.)

And in doing so, guarantees that more charges will be brought... in bad faith.