Rosin: The Demand for Law School

The application rate--the percent of takers that apply to ABA law schools--has fallen steadily since 2003-2004.  Over that same period, the enrollment rate--the percent of applicants that are accepted and enroll in an ABA law school has increased from below 50% to above 60%.  The numbers for the 2009-2010 application year have not yet been released. but I imagine that they will show a sharp increase in the enrollment rate. 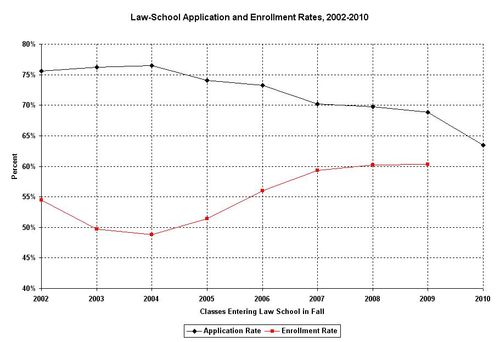 If the sharp drop in takers in June 2011 continues for the application year, or even if the downward trend in the percentage of takers actually applying to law school continues,  law schools  will be forced to choose between

If law schools take the second course, and just fill seats, the result should be falling academic credentials of entering classes.  Certainly, that is what the corrected medians for the University of Illinois shows--a 4-point year-over-year drop in the LSAT median from Fall 2010 to Fall 2011.  Regardless of what an LSAT score may say about applicants individually,  it does say a lot about groups (The LSAT-free Illlusion).  With the ABA poised to raise minimum Bar passage standards for law schools (ABA Standards and Bar Passage Rates), lower entering-class academic credentials may well put the accreditation of lower-tier law schools, especially those in California, at risk (Interpretation 301-6:  Low LSATs and High "Cut Scores").

Listed below are links to weblogs that reference Rosin: The Demand for Law School: