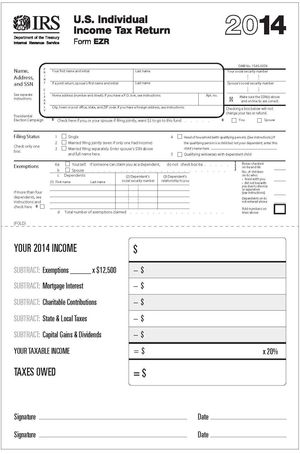 Here is a summary of the tax component of Rick Perry's Cut, Balance, and Grow plan released this morning:

The plan starts with giving Americans a choice between a new, flat tax rate of 20% or their current income tax rate. The new flat tax preserves mortgage interest, charitable and state and local tax exemptions for families earning less than $500,000 annually, and it increases the standard deduction to $12,500 for individuals and dependents.

This simple 20% flat tax will allow Americans to file their taxes on a postcard, saving up to $483 billion in compliance costs. By eliminating the dozens of carve-outs that make the current code so incomprehensible, we will renew incentives for entrepreneurial risk-taking and investment that creates jobs, inspires Americans to work hard and forms the foundation of a strong economy. My plan also abolishes the death tax once and for all, providing needed certainty to American family farms and small businesses.

My plan restores American competitiveness in the global marketplace and provides strong incentives for U.S.-based employers to build new factories and create thousands of jobs here at home.

First, we will lower the corporate tax rate to 20%—dropping it from the second highest in the developed world to a rate on par with our global competitors. Second, we will encourage the swift repatriation of some of the $1.4 trillion estimated to be parked overseas by temporarily lowering the rate to 5.25%. And third, we will transition to a "territorial tax system"—as seen in Hong Kong and France, for example—that only taxes in-country income.

The mind-boggling complexity of the current tax code helps large corporations with lawyers and accountants devise the best tax-avoidance strategies money can buy. That is why Cut, Balance and Grow also phases out corporate loopholes and special-interest tax breaks to provide a level playing field for employers of all sizes.

To help older Americans, we will eliminate the tax on Social Security benefits, boosting the incomes of 17 million current beneficiaries who see their benefits taxed if they continue to work and earn income in addition to Social Security earnings.

We will eliminate the tax on qualified dividends and long-term capital gains to free up the billions of dollars Americans are sitting on to avoid taxes on the gain.

Listed below are links to weblogs that reference Rick Perry's Flat Tax Plan:

» Does 20 percent trump 9 percent? from Roth & Company, P.C.
GOP Presidential contender Rick Perry has made a bit of a splash with an optional "Flat Tax"' proposal. I don't... [Read More]

The problem with this tax plan is that by giving the taxpayer a choice between the flat 20% and the normal system, most taxpayers will still spend the time and trouble they always have trying to figure out which plan is actually better for thier tax situation. I really don't see compliance costs going down all that much.

I'm good with taxing capital gains as any other income, as long as it's indexed for inflation.

Capital gains: you guys should remember that investments are often held for long periods. Any tax when sold should be figured on the gain once inflation is factored out. That's easy, just publish an official inflation escalator for each year.

If the tax code doesn't do that (and it doesn't now), you're taxing inflation. Tax is 15% now; 20% net of inflation would be fair (but no death tax, to avoid breaking up family owned business).

Flat tax: a lot of people are getting money back right now. They would have to continue to file using the old system, so they'd still be fighting H&R Block every year. They would do better with a simple refundable tax credit of a few thousand dollars coupled with a slightly higher rate, Mr. Perry!

As long as there is still some corporate tax, then a mortgage deduction makes some policy sense. Otherwise, people will form corporations (or more likely LLCs) to hold their homes and rent to themselves to get the same deductibility, at slightly higher transaction costs.

Great plan, but why include any deductions at all? The whole point is to eliminate all deductions, so presumably the remaining ones are there either for some intrinsically good reason or to garner necessary votes.

Charitable Deduction: the most defensible on both counts-- though half of all contributions aren't even recorded.

Mortgage Deduction: Probably included because it's so popular... except that if there's any time when we can sell the idea of the Feds no longer inflating the housing bubble, this is it.

State/Local tax deduction: This makes no sense at all on policy grounds. Politically, the people most likely to support this are in blue states who wouldn't support Perry anyway, so why bother currying their favor?

It seems like a modified Forbes plan. Overall a great plan and I'm all for it. However, I'd go even further and remove the three deductions above.

Ditto to mark l. and to Jim.MtnViewCA

Why should a little old grandma with her very modest retirement account in dividend-earning stocks, say earning her $500/month, have to pay the 20% rate (through the corporate tax)?

Make corporate taxes 0. Make capital gains taxable at the same rate as all other income, and subject to the standard deduction. That way grandma doesn't suffer, and investment in encouraged.

Dividends, Capital Gains, Hedge-funds, Stock-options, etc...
Just tax consumption - a Sales Tax - and lets people earn their income in any manner that floats their boat (which they'll pay a Sales Tax on).
When shifting from one theory of taxation, to another, there will always be someone who takes a hit.
The question is, do we want the economy to grow - which requires investment - or do we just wish to continue down the destructive path that we've trod for the past 100-years?
As long as investment is penalized (taxed), we won't have enough of it.
We need to, once again, encourage people to save - instead of taking the attitude of "If I don't spend it, the Gov't will just tax it away".

This is not a tax plan, it's a political gambit. It is a facade papering over the current tax code. Since it does not broaden the base, and is "optional" all the problems of the current tax code remain. I had hope for a serious tax reform proposal, you can't do that with an "option". Once again Perry, for whom I had high expectation, disappoints. There are a few good ideas, but overall this is another pander.

Wouldn't those hedge fund managers be receiving stock as income at some point? They can be taxed on that. If they chose to let it ride as stock, then any additional gains wouldn't be taxed.

I don't care for the phase out of whatever deduction the plan allows. Either keep them irregardless of income (i.e. everyone is entitled to them whether they are poor or filthy rich without restrictions) or don't have them at all. If you have a phase out point, then games could be played where exactly that occurs. I am not sure it is a good idea for those articulated deductions but what about Health Care and Health Insurance? Well, that could come in when the plan is implemented since with deductions, one can always expect there will be other very worthy deductions that might be proposed.

I think that dividends and capital gains should be subject to some level of flat tax for instance dividends at 15% and capital gains at 10% or both at 10 or 15% or include in the main taxable group at 20%, but tax it at some level. Not taxing them at all invites gaming and increases the chances that some tax (or an Alternative Minimum Tax) would be imposed at some point in the future.

Does this count ROTH IRA withdrawals as taxable income? if it does, it's a cheat: we already paid taxes on that money, at a higher rate (probably).

If it does not, then this works.

The problem with the "Fair" tax is that it double taxes ROTH IRA withdrawals by imposing a national sales tax (and, honestly, it's very hard to figure out how to fix that in the "Fair" tax). Yes, the "Fair" tax folk tap dance around this- but read the proposal.

Steve Forbes's plan in 1997 fit on a smaller card.

Instead, we should eliminate corporate taxes altogether, and tax dividends (actual and constructive) and capital gains as ordinary income.

This is exactly what I came to the comments section to say. Exactly.

Income is income, I don't care the source, and only actual people have income, not legal entities. Done.

And it has the nifty benefit of eliminating most of the highly-game-able "non-profit" crap.

Wait....
If we do all that, will we still have enough tax revenue to afford our big government and all its spending?

Here's a question: if they eliminate the capital gains tax, doesn't that mean all the hedge fund managers making millions or billions a year will pay exactly zero percent tax on all of their income (i.e. carried interests)? What about all the Republican protestations that everyone should pay something?

This part is baffling to me. Why should dividends and capital gains be treated specially? Individuals should not choose how to receive income based on the tax consequences. This is a great example of horizontal inequity in the tax code, and this one in particular is going to make Perry's plan a mouth-watering target for the 99%ers. It's bad tax policy and it's bad politics.

Instead, we should eliminate corporate taxes altogether, and tax dividends (actual and constructive) and capital gains as ordinary income. Then we'd get businesses and individuals making decisions based on their business judgment rather than Washington's.

a massive trap for cain.

far better that he act receptive to the idea, than pit his 999 plan against it. it allows him to back off the 999 plan, to a degree, while saving significant face.

he should quickly claim the mantle of directing the focus of the gop nomination towards fundamental change in regards to the tax system.

it would be a very clear statement of the facts.