Reuters, Underpaid Women and Their Men, by David Cay Johnston:

New data on U.S. incomes, poverty, pensions and philanthropy all show a common economic reality -- women are still getting shortchanged. ... 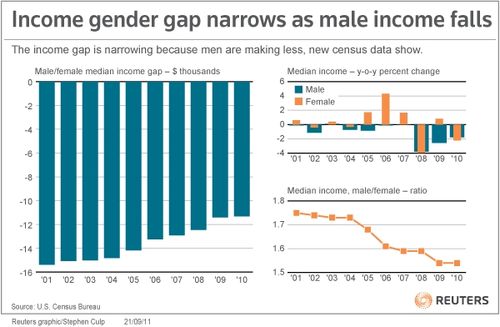 Again people (not all) comment without reading the column; had they done so they would know that I included data from the Guidestar studying showing that women in the same management positions at the same size nonprofits make less and as the size of the nonprofit grows the ranks of women executives dwindle.

Instead of thoughtful responses, though, some people who cower behind noms d'Internet write nonsense.

The plural of anecdote is not data, but your friend's case is easily explained without any nefarious subterfuge. A lateral hire is usually paid more, since you have to lure someone into working for your company in a certain position. Your friend was clearly ok with working for wage X (before promotion) and now earns X + Y. It's hard to negotiate the same salary as the previous employee when you have (1) less experience at that level and (2) you were content to work for significantly less than that salary last week. No one ever quit a job because they were offered a promotion and more money; they aren't nearly as worried that your friend won't take the job. Additionally, the male salary may have been baselined during more flush years (such as 2007).

No bullying involved. If your friend truly feels that she's worth more than she is being offered, she should quit and get a job that pays her the prevailing market rate. No one is going to pay a man or woman more if they are willing to settle for less.

The Gender Gap is real. A close friend of mine works at the pharmacy in a hospital. A male employee left the hospital. My close friend was promoted to that male employee's position. She thought she was going to be paid the same as the former male employee, boy was she wrong. She has just as much experience and education as the male employee, but she was offered a lower salary. The new salary is higher than her previous, but lower than the male employees. Maybe it is because she was being promoted whereas the guy was hired into that position. I don't know, but it does not make much sense. My friend even brought with her into the salary negotiations the market rate for her new position, but the hospital refused to pay that amount, which was what the male employee was paid. I think one factor is that as a woman going up against a higher educated male boss, he was not going to take her seriously (aww how cute she printed off some facts and figures) and bullied her to get what he offered.

I've always wondered whether the journalists who write these articles are intentionally trying to mislead or just ignorant. Most journalists that I know are quite ideological and completely innumerate, so it could be either I suppose. One of the games that the manipulative types often play is to lie with facts, of course neglecting to tell you that the fact they are quoting is completely irrelevant to the actual point. I wonder how long it will take for reality to catch up with this myth. I was seeing data that contradicted the whole gender gap myth as early as the mid 90's. The book Women's Figures (Christine Stolba was one of the authors, from about 10 years ago) had a lot of references to these studies.

The 'gender gap' lie is itself a tired old myth. In reality, women are paid MORE than men relative to productivity generated. Yes, MORE.

Read the Misandry Bubble for graphs and charts about the special treatment women get at the expense of men.

Actually, this particular bit of info seems to be even more misleading than most of these... median income would leave out both hours worked and what kind of job.

Extreme example: compare 10 fast food workers with 10 engineers. The "median income" of the 2 groups will be very different!

If you don't control for hours worked or type of work, then the results are useless... except perhaps to suggest that one group works a lot less or at a lot easier/less dangerous job than the other.

There's also the usual lack of mention of number of hours worked for that pay. Once you take into account hours actually worked (women take more time off work, usually family or health related), women are found to be paid the same or slightly more than men.

I don't see feminists scrambling to close the work related death gap anytime soon. They want "eqaulity" without putting in the work and taking the risks.

There's a recent study out that shows that women under the age of 35 who are single and college educated earn more than men of the same age. Yet Johnston in the linked article immediately goes off about equal pay and keeps perpetuating the myth that women make 2/3rds to 3/4ths of what men make.

This may be true for some "pink-collar" jobs that women were limited to 40 years ago, but is hardly true today. Most studies that have controlled for age, experience, education etc... show that there is either (1) no gap or (2) a gap of several percentage points. Given another decade or so, the average woman working full-time will earn more than their male counterparts, as most women work jobs in healthcare and education, two fields that are on the upswing (compared to construction and other blue-collar work). Good for them! I'd certainly like to be a SAHD at that point.