Washington politicians say high corporate tax rates are driving U.S. companies to invest offshore where tax rates are lower. But that is not General Electric's experience. GE's disclosures show that over the last decade it paid much lower tax rates in America than offshore, just the opposite of the Washington political mantra. Even more puzzling, the U.S. corporate giant chooses to take more of its profits in other lands despite the higher tax rates there.

Given that GE has a roughly 1,000-person tax department dedicated to paying as little as possible in taxes, what the disclosures show is that something other than tax policy is driving GE's business decisions. The law gives companies a great deal of latitude in deciding how to arrange where they report profits from multinational transactions. GE won't elaborate on why it takes so much of its profit in higher tax jurisdictions offshore. 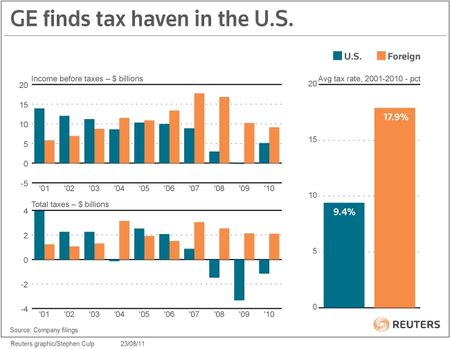 Listed below are links to weblogs that reference Johnston: America is GE's Tax Haven:

@ SCtax, did you read my column before posting your juvenile comments?

Transfer pricing is, without a doubt, involved, but a) so are the significant business tax credits enacted during the GWBush era, b) the four-fold increase in GE lobbying expenses and c) the issue my column focused on is completely missed in your post.

anon @ 240. Depending on how you do the math, income shifting can cause a decrease in the effective tax rate. But you raise a good point. Someone needs to dig into this (and not me cuz i'm busy).

My understanding is GE gets massive amounts of Energy credits from its industrial and consumer products which push down its ETR in the US (absent valuation allowances). Since the credits (and any US NOL if the US income is lowered) can be carried forward it is still rational to prefer that more profit be earned overseas than in the US due to their lower statutory rates. Helpful that they have globe spanning operations that would support the transfer pricing.

You do realize that article is about effective tax rates and not the US reported taxable income, right?

We should move back to the tarrifs system of the early 20th century, where each country's ability to tax was a function of its citizens' consumption.