It's Time to Deregulate the Practice of Law 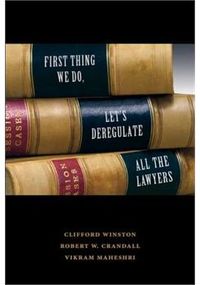 Wall Street Journal op-ed, Time to Deregulate the Practice of Law, by Clifford Winston & Robert Crandall (both of Brookings Institution; co-authors, First Thing We Do, Let's Deregulate All the Lawyers (2011)):

The job market is not looking bright for Americans of all walks of life, even Ivy League college graduates and those with advanced degrees. For example, a new wave of law school graduates has just taken state bar examinations, which they must pass to obtain a license to practice law. But after accumulating as much as $150,000 in law school debt (likely on top of undergraduate debt), many of those test-takers are concerned that jobs in their field are vanishing.

Is there really an excess supply of lawyers? The Senate Judiciary Committee is investigating the subject while the New York Law School and the Thomas Cooley Law School in Michigan are being hit with class action suits claiming that they fraudulently inflated employment statistics to lure prospective students. But the solution proffered by many in the legal community—to put new limits on entry into the legal profession—is not the answer and will make the problem worse over the long term.

The reality is that many more people could offer various forms of legal services today at far lower prices if the ABA did not artificially restrict the number of lawyers through its accreditation of law schools—most states require individuals to graduate from such a school to take their bar exam—and by inducing states to bar legal services by non-lawyer-owned entities. It would be better to deregulate the provision of legal services. This would lower prices for clients and lead to more jobs.

Occupational licensing limits competition and raises the cost of legal services. But those higher costs are not justified when the services provided by lawyers do not require three years of law school and passing a particular test. One example is LegalZoom.com, an online company which sells simple legal documents—documents that should not require pricey lawyers to prepare—like do-it-yourself wills, uncontested divorce documents, patent applications and the like. ...

Every other U.S. industry that has been deregulated, from trucking to telephones, has lowered prices for consumers without sacrificing quality. ... Entry by new firms—sometimes from other industries—spurs innovation. ... Allowing accounting firms, management consulting firms, insurance agencies, investment banks and other entities to offer legal services would undoubtedly generate innovations in such services and would force existing law firms to change their way of doing business and to lower prices.

Supporters of occupational licensing to restrict the number of lawyers in the U.S. are wrong to assert that deregulation would unleash a wave of unscrupulous or incompetent new entrants into the profession. Large companies seeking advice in complex financial deals would still look to established lawyers, most of whom would probably be trained at traditional law schools but may work for a corporation instead of a law firm.

Others, seeking simpler legal services such as a simple divorce or will, would have an expanded choice of legal-service providers, which they would choose only after consulting the Internet or some other modern channel of information about a provider's track record. Just as the medical field has created physician assistants to deal with less serious cases, the legal profession can delegate simple tasks.

Listed below are links to weblogs that reference It's Time to Deregulate the Practice of Law:

Let's go back to having surgery performed by barbers, too. They charge a lot less.

What needs to be done in order to reduce barriers to entry is eliminate state specific bar exams and institute one national bar exam. The CPA exam is a great example: it is administered as one national test, with each state imposing different requirement to be licensed as a CPA. It is ridiculous that in 2011 if I want to move from one state to another I have to sit for a new bar exam that contains 85% of the same material.

Yes, allowing accounting firms and management consulting break into the law field will most assuredly lower prices. Because they provide services so cheaply and efficiently, as everyone who has paid such a bill from them can attest. I wonder if the authors would similarly support allowing law firms into the accounting and auditing field.

Typical WSJ free market junk. "Every other U.S. industry that has been deregulated, from trucking to telephones, has lowered prices for consumers without sacrificing quality. ... " It must be nice traveling with WSJ execs in private aircraft. I know the quality of business air travel has declined precipitously since deregulation. I really don't like paying extra for my bag or my snack, and ticket prices have gone up and down depending on where you want to go. As for telephones, there was a time when ATT would actually send a tech to your home to install a new line or a telephone. Now, it's do it yourself or hire a more-or-less qualified contractor and good luck.

I recall reading somewhere that engineers did not need an education or licensing until bridges collapsed and the media published the stats on the death toll. This story reminds me of that.

Having worked with, for and against hundreds of lawyers in the past three decades, I can readily evaluate the skills of a lawyer in a particular field.

I am not certain the average consumer can do that.

I know more about some kinds of business transactions than many lawyers, so... maybe I could sell some advice through my consulting firm without several disclaimers.

Most of the work done by CPAs can be done by anyone (excepting audits) and most CPAs are really busy, so maybe lawyers will survive.