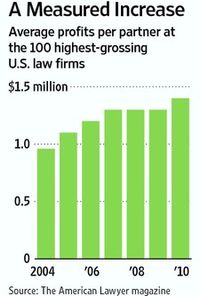 More than half of the country's top 50 law firms may have overstated a key measure of profitability in a closely watched ranking, according to an industry analysis prepared by a major bank.

The findings— which were shared with The Wall Street Journal by a person briefed on the report— raise questions about which law firms are making the most profit as the legal industry slowly recovers from a prolonged downturn.

The ranking of "profits per partner," published annually by the American Lawyer magazine in May, is the most commonly used gauge of health in the $100 billion global corporate-law-firm industry. The figures are found by dividing net operating income by the number of equity partners at a firm.

Roughly 22% of the top 50 firms overstated their profits per partner by more than 20% in 2010, according to the person briefed on an analysis by Citi Private Bank Law Firm Group, a Citigroup unit and major lender to law firms. ...

Now maybe one can see why lawyers hate the idea of publicly traded law firms.  Imagine if law firms faced the scrutiny of public securities markets.  I don’t actually think that law firms are deliberately lying.  The problem is that they persist in using an easily manipulable number instead of a more reliable metric.

But since I think big law has already died I see this as rearranging the deck chairs on the Titanic after it has sunk.

Listed below are links to weblogs that reference 53% of Top 50 Law Firms Overstated Profits to Goose AmLaw Ranking:

So law schools have to be ordered by the ABA to tell the truth.

Court files are full of mortgage documents with phony signatures.

Not a good year for lawyers.