The Fall of the Faculty 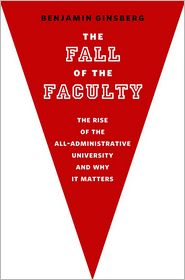 Benjamin Ginsberg (David Bernstein Professor of Political Science, Johns Hopkins University), The Fall of the Faculty The Rise of the All-Administrative University and Why It Matters (Oxford University Press, 2011):

Until very recently, American universities were led mainly by their faculties, which viewed intellectual production and pedagogy as the core missions of higher education. Today, as Benjamin Ginsberg warns in this eye-opening, controversial book, "deanlets"--administrators and staffers often without serious academic backgrounds or experience--are setting the educational agenda.

The Fall of the Faculty examines the fallout of rampant administrative blight that now plagues the nation's universities. In the past decade, universities have added layers of administrators and staffers to their payrolls every year even while laying off full-time faculty in increasing numbers--ostensibly because of budget cuts. In a further irony, many of the newly minted--and non-academic--administrators are career managers who downplay the importance of teaching and research, as evidenced by their tireless advocacy for a banal "life skills" curriculum. Consequently, students are denied a more enriching educational experience--one defined by intellectual rigor. Ginsberg also reveals how the legitimate grievances of minority groups and liberal activists, which were traditionally championed by faculty members, have, in the hands of administrators, been reduced to chess pieces in a game of power politics. By embracing initiatives such as affirmative action, the administration gained favor with these groups and legitimized a thinly cloaked gambit to bolster their power over the faculty.

As troubling as this trend has become, there are ways to reverse it. The Fall of the Faculty outlines how we can revamp the system so that real educators can regain their voice in curriculum policy.

Listed below are links to weblogs that reference The Fall of the Faculty:

Interesting article. The counterpoint is that the American University under the leadership of the faculty became a place where the focus was on the faculty and not the student. Specifically, the cost was enormous, the the teaching was poor, once you got tenure you went on auto pilot, and it was run by a bunch of idealistic academics who had never been in the real world. The worst teachers were the old lions who were the heads of the departments. The easiest job I ever had was teaching college.....but hey, maybe it is better than the administrators.