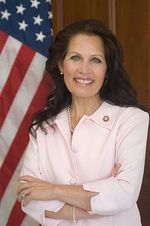 Republican presidential candidate Michele Bachmann suggested yesterday that she would support imposing a moratorium on the federal income tax as a way to boost the economy. ...

Her comments on the income tax came in response to a question from Don Gorman, a former New Hampshire state representative from the Libertarian Party. Gorman asked Bachmann to comment on his suggestion to improve the economy: "Put a moratorium on the entire income tax for one year for every citizen in this country and watch this country take off."

For more, see Forbes, Michele Bachmann On Board With Tax Holiday.

And you plan to pay the interest on the debt to China and Japan with what??

Frankly I tend to think reducing personal income taxes, even down to 0, is an intriguing and possibly good idea. Keep corporate rates as they are, allow people to keep more of what they earn, they will spend more, creating more state taxes, creating more demand for production of goods and services, thus creating more federal taxes (except for Google). Of course along with this must be some very serious fed cuts, or at least extreme slowing of this admin's velocity of spending.

"Eliminate the income tax and all other taxes. This should result in far more revenue than we need."

If taxes are gone, then we won't get the theoretical benefit of an increased revenue stream.

In the 2012 budget proposal, it is estimated the federal government will raise $2.5 trillion in revenues. Her proposal for no revenues would mean a $2.5 trillion greater budget deficit.

If taxes are so evil, lets eliminate all taxes and see how society copes without the military, social security, medicare, medicaid, etc..

Why stop with a one-year moratorium? Since we are told by Mitch McConnell, Tim Pawlenty and many other brethern of the right that reducing taxes increases revenue, why not take it to its logical conclusion? Eliminate the income tax and all other taxes. This should result in far more revenue than we need.

Another stimulus in a different package. If she really wants to impress folks, let's see her float the fair tax. That would ensure the tax load gets distributed equally in this country, even from drug dealers, illegals and underworld types that pay no formal taxes. Destroy the income tax, and place the entire tax load on consumption. Touting that would allow me to hold my nose and vote for her. Otherwise don't waste my time time temporary fixes. Fix the problem.

It would spur taxable M&A deals, repatriation of foreign stashed funds, and a bevy of tax sheltering transactions. Everyone with a retirement account could convert it to a Roth....

I wonder why she failed to credit Ron Paul with this idea. He's been advocating the abolition of the federal income tax for as long as he's been in the congress.

It seems absurd and borderline illiterate to take these off-the-cuff comments as a concrete proposal that she is actually advocating. Leave conclusion-jumping histrionics to Matt Taibbi, please.

Look, peaches (and other fruit) are rotting in GA now that the legislature passed its tough on immigrants law. No American will go out into the fields and pick the fruit for the money farmers are willing to pay. (Prof. Maule's point is not just theory, it is real life).

Taxes on individuals are in affect a cost and thus past through to the corporations. With less income to spend on account of income (and other kinds of ) taxes, individuals have less money to consume. Am I actually making Bachmann's argument for her? No, it is just as ridiculous and absurd as any other "get rid of taxes solves all the world's problems" theory.

Great to see the defenders of US Tax law, a distorted, byzantine, unworkable, (even by the IRS), unfair, ridiculous system tottering on and on emerge to defend it.

Flat Tax or Fair Tax is what any sensible country would do. Or abolish the whole thing. Federal money doesn't secure the border, promote the Bill of Rights, educate anyone or do any good thing.

Jobs overseas will come back when U.S. citizens are willing to work for $3 an hour. There are plenty of jobs in this country being held by legal and illegal immigrants because $4 an hour is golden in their home countries. So long as the resources on the planet are less than the resources demanded by the 7 billion people living on it, the economy will reflect the scarcity. Every time four Chinese peasants "make it" to the Chinese middle class, an American falls from the middle class to the world of unemployment. The "infinite growth is possible" zealots come from the same school of "reduced taxe, reduce to zero, and tax revenues will blossom" nonsense. Bachmann proves what I've been arguing for years, that the anti-tax crowd won't stop until taxes are eliminated, governments shrink to nothing, and they and their corporate fat cat and rich snob allies can run rampant over everyone else with nothing in place to cut them down to size. I don't think Bachmann is a moron, or no-ron. She knows quite well what she and her co-conspirators are doing and plan to do. The morons are the Americans who suck up to this nonsense the way children followed the pied piper. It's no coincidence that these same people are chopping funds for education. An educated citizenry is the worst enemy of the tyrannical oligarchy.

I took this to mean if we had done a tax moratorium vs stimulus spending ("If we would have allowed every American to take that much more money home in their pockets..."), but not suggesting we do that at this stage.

Yes, corporate taxes are passed through to the consumer. That's why Microsoft should be paying corporate taxes. Most of its customers are outside the United States.

When I buy a Toyota, I pay Japanese taxes that provide healthcare to Japanese workers. Why shouldn't it work both ways?

Take corporate tax rates to zero permanently. Taxes on corporations are in affect a cost and thus past through to the consumer. Competition will allow prices to come down. There will be no double taxation on dividends. Stock prices will reflect yields. Jobs overseas will come back, foreign investments would increase and corporate cash generated overseas and kept there will come back to the US. Following that, take individual income taxes to a single flat tax - no deductions for anything. Let all the non payers have a "dog in the hunt" getting them to understand why government spending is excessive. Then follow a plan like the Ryan plan to reduce spending and pay down the debt. Economic and job growth would follow. There is no good economic or social rationale for taxing corporations.

But there is a word in English that describes this idea. It is "stimulus."

There is also a word for someone who carries it to an extreme. It is "demagogue."

So the deficit doesn't matter anymore?

I have seen this idea from the left and the right, but not since the deficit became the guiding start for all politicians.

She must have been the most popular attorney with Petitioner's counsel when she worked for the IRS Office of Chief Counsel prosecuting cases. I think there should be no income tax, so why don't you go home and forget that the IRS ever came by.

There is no word in English to describe this idea. See is not a moron, a less-ron, or a sub-ron, she's a no-ron.

I wonder what unemployment would be if no income tax was collected? I'm am willing to lay odds on 25% or over for any takers as I am confident it would be higher (no income tax means no revenue for the Fisc which means no money for government contractors and others which means they cannot afford service providers -- medicine, food, gas, heat, etc. It is not a ripple effect it is a tidal wave.

Stupidity knows no bounds. It seems as though it has become litmus test of sorts for election to Federal office.

Hey, I'm fair, what guy tweets his crotch to women all over the country, denies it, and then goes "oh yeah, it was me." And I've called them the Dumbocrats for years now. I was actually shocked when Obama actual showed some spine, albeit for political purposes. The last Democrat who said he would raise taxes won only D.C. his home state in the Presidential election -- that is why no one has ever said they support a tax increase in the last 30 years. Of course, Obama is in office, like Bush the First, so he has the luxury of saying this and actually doing something about it (even if he meets the same demise as Bush the First). In fact, too much credit goes to Bill and not enough to George the First for what happened in our economy in the 90's. He lost the election, but he may have saved the country. Too bad his son, Bush the Second, flushed us down the toilet like a dead goldfish. I wonder if we will ever recover from Bush the Second's tax and fiscal policies.

Maybe we should start with a moratorium on her salary an see how that works out. I mean, we should test drive this thing first, and if she thinks it is such a good idea she should be the guinea pig. She should see what happens when revenue stops coming in first hand before she does it to the Fisc.