[T]he best description of the differences between the two casebooks may be that Problems in Tax Ethics is structured like a typical casebook while Regulation of Tax Practice is structured more like a treatise. Casebooks typically involve excerpts from cases, statutes, and articles, followed by comments and broad questions but no authoritative statement by the authors on the state of the law. In a casebook, the emphasis is often on the ambiguities and differences between the authorities. Problems in Tax Ethics follows that format by using excerpts and emphasizing multiple authorities. ... In contrast, Regulation of Tax Practice analyzes the relevant authorities and explicitly concludes what is required in various situations. ...

Either of these casebooks would be an excellent choice for a one- or two-hour law school course in tax ethics. Problems in Tax Ethics provides a format familiar to law students, underscoring the ethical principles of the bar to which the students have been exposed in other courses, but requiring the application of the principles in tax-specific situations. Offering more questions than answers, both explicitly and implicitly, the casebook seems especially useful for discussion-centered courses. Regulation of Tax Practice’s more treatise-like approach may at first seem less useful for classroom discussion. However, the treatise-like analysis of many issues may serve as a foundation for a higher-order discussion. ... [G]iven the more treatiselike style of Regulation of Tax Practice, many practicing tax lawyers may find it a handy addition to the firm’s bookshelves. Both are valuable additions to the body of work on tax lawyer ethics, and I commend their authors for their contributions to what is an increasingly complex set of concerns. 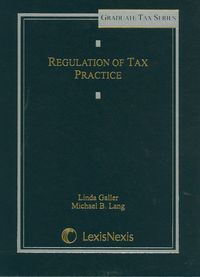 There are ten other books in the Graduate Tax Series:

Listed below are links to weblogs that reference Hatfield: Teaching Tax Lawyer Ethics: