There are ways to greatly ease the burden and make college more affordable, according to new data from the University of Texas at Austin.

In a study [Faculty Productivity and Costs at The University of Texas at Austin] for the Center for College Affordability and Productivity, Christopher Matgouranis, Jonathan Robe and I concluded that tuition fees at the flagship campus of the University of Texas could be cut by as much as half simply by asking the 80% of faculty with the lowest teaching loads to teach about half as much as the 20% of faculty with the highest loads. The top 20% currently handle 57% of all teaching.

Such a move would require the bulk of the faculty to teach, on average, about 150-160 students a year. For example, a professor might teach one undergraduate survey class for 100 students, two classes for advanced undergraduate students or beginning graduate students with 20-25 students, and an advanced graduate seminar for 10. That would require the professor to be in the classroom for fewer than 200 hours a year—hardly an arduous requirement.

Faculty will likely argue that this would imperil the university's research mission. Nonsense.

First of all, at UT Austin, a mere 20% of the faculty garner 99.8% of the external research funding.

Second, faculty who follow the work habits of other professional workers—go to work from 9 a.m. to 5 p.m. and work five days a week for 48 or 49 weeks a year—can handle teaching 200 hours a year while publishing considerable amounts of research. I have done just this for decades as a professor.

Third, much research consists of obscure articles published in even more obscure journals on topics of trivial importance. Mark Bauerlein, a professor of English at Emory University, once estimated that 21,000 articles have been written on Shakespeare since 1980. Wouldn't 5,000 have been enough? Canadian scholar Jeffrey Litwin, looking at 70 leading U.S. universities, concluded the typical cost of writing a journal article is about $72,000. If we professors published somewhat fewer journal articles and did more teaching, we could make college more affordable.

Here are some interesting charts from the study: 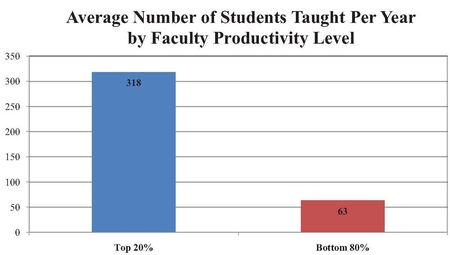 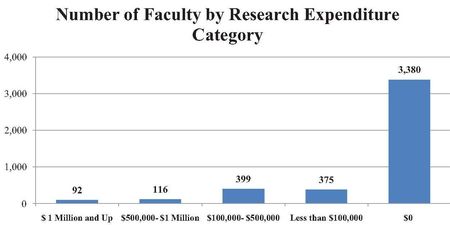 Listed below are links to weblogs that reference WSJ: Cut College Tuition in Half by Increasing Faculty Teaching Loads:

Here is a response from the president of the University of Texas: http://www.statesman.com/opinion/powers-how-to-measure-the-learning-experience-at-1525080.html

I think this prof is on to something. My suggested change would be to leave the true academics alone. What I mean by that is the profs in the real academic disciplines, such as the liberal arts and humanities. Let them continue with their esoterica. The rest of the professors--essentially all those engaged in training people for business, engineering, law, medicine, dentistry, nursing, accounting, military science, and other occupational categories formerly subject to apprenticeships, but now merged into the university system--should get back to teaching their professions.

When I studied tax at NYU Law, I was amazed to see that the best professors were the adjuncts who essentially worked for free.