Some of the nation’s largest corporations have amassed vast profits outside the country and are pressing Congress and the Obama administration for a tax break to bring the money home. Apple has $12 billion waiting offshore, Google has $17 billion and Microsoft, $29 billion.

Under the proposal, known as a repatriation holiday, the federal income tax owed on such profits returned to the United States would fall to 5.25% for one year, from 35%. In the short term, the measure could generate tens of billions in tax revenues as companies transfer money that would otherwise remain abroad, and it could help ease the huge budget deficit.

Corporations and their lobbyists say the tax break could resuscitate the gasping recovery by inducing multinational corporations to inject $1 trillion or more into the economy, and they promoted the proposal as “the next stimulus” at a conference last Wednesday in Washington. “For every billion dollars that we invest, that creates 15,000 to 20,000 jobs either directly or indirectly,” Jim Rogers, the chief of Duke Energy, said at the conference. Duke has $1.3 billion in profits overseas.

But that’s not how it worked last time. Congress and the Bush administration offered companies a similar tax incentive, in 2005, in hopes of spurring domestic hiring and investment, and 800 took advantage. Though the tax break lured them into bringing $312 billion back to the United States, 92% of that money was returned to shareholders in the form of dividends and stock buybacks, according to a study by the nonpartisan National Bureau of Economic Research. 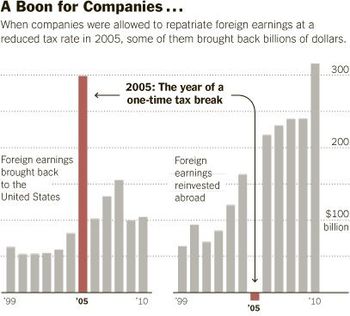 Listed below are links to weblogs that reference NY Times: Companies Push for Repatriation Tax Holiday:

I think I like Jim's idea; have them dividend the repatriated money out immediately to their shareholders, witholding to make sure the tax gets paid (and to make sure that non-profits don't get a double-whammy tax benefit).

Interesting counterpoint to the post just above on the Schering-Plough decision.

Tell them they get the repatriation tax law change if they agree to support a change to the rates in 26 USC 1(h) so they are adjusted so that dividends and capital gains are taxed at ordinary income rates with a pass through imputed credit for dividends for taxes paid at the corporate level at the same rate as the effective tax rate.

And add that share buybacks done with these funds would be subject to 26 USC 302.