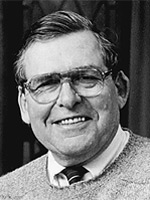 “Eli Clark was an inspirational teacher and an invaluable mentor to generations of Yale students,” said Justus S. Hotchkiss Professor Emeritus of Law Michael Graetz, a longtime friend and colleague of Professor Clark at Yale Law School. “He was an indefatigable, and often indispensible, citizen of the law school and the university. His work on trusts and estates and their taxation educated students across the nation. Eli was a great storyteller, a raconteur—always with a smile on his face and a twinkle in his eye. Most importantly, he was a kind and gentle man and a loyal friend, a man who reveled in his family.” ...

Contributions may be made in Professor Clark’s memory to the Annie and Elias Clark Scholarship Fund, Yale University Office of Development, P.O. Box 2038, New Haven, CT 06521-2038.

Listed below are links to weblogs that reference Death of Elias Clark:

A real giant in the field.