[A] recent study by Northwestern University law professor Thomas J. Brennan strongly suggests that firms, anticipating a second holiday, have already aggressively shifted profits overseas. Analyzing the public records of a large group of U.S. multinationals that together accounted for 79% of the repatriations that occurred under the 2004 holiday, Brennan found that “since the holiday window, there has been a dramatic increase in the rate at which firms add to their stockpile of foreign earnings kept overseas.” In each of the three years following the 2004 tax holiday, these companies increased the amounts of new “permanently reinvested” foreign earnings by three times as much, on average, as they had in the each of the ten years before the holiday (see Figure 1) 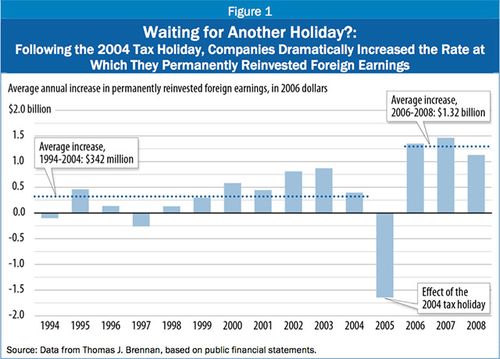 JCT estimated that while a second repatriation holiday would raise revenues initially (as corporations took advantage of the holiday to repatriate foreign earnings), it would cost the Treasury considerably more in later years, for a ten-year net revenue loss of $79 billion — 24 times the net projected cost of the 2004 tax holiday (see Figure 2) 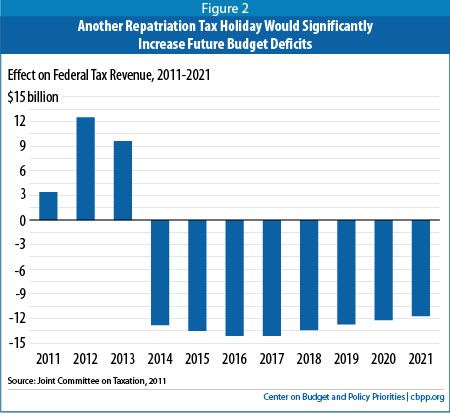 Although a total of 843 companies participated in the 2004 tax holiday, the bulk of the benefit went to companies in the sectors identified by Everson as having made the most aggressive use of tax avoidance schemes. IRS data show that half of all qualifying repatriations under the 2004 tax holiday came from large pharmaceutical and technology corporations (see Figure 3); one large pharmaceutical company, Pfizer, alone accounted for over 10 percent of total repatriations. 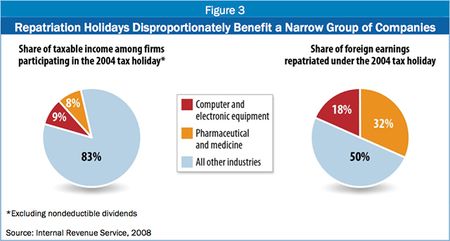 Listed below are links to weblogs that reference CBPP Opposes Repatriation Tax Holiday:

Somebody else must be reading my blog!