Summer Reading: An Empire of Ice 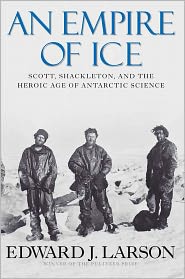 Here is a great non-tax book for your summer reading list: An Empire of Ice:  Scott, Shackleton, and the Heroic Age of Antarctic Science (Yale University Press, May 31, 2011) (amazon), by my Pepperdine colleague and dear friend, Ed Larson. The book received glowing praise in yesterday's New York Times Sunday Book Review, Science and the Race for the South Pole:

[T]o Edward J. Larson, a professor of history and law at Pepperdine University, the important thing about this story is not who arrived first at the pole, but who did the best field research along the way. And by this measure, Scott was the clear victor. “If the race to the South Pole eventually consumed Scott, it was never at the expense of science,” Larson contends. ...

The author, who won the 1998 Pulitzer Prize in history for Summer for the Gods: The Scopes Trial and America’s Continuing Debate Over Science and Religion, is a brilliant researcher. An Empire of Ice reflects exhaustive digging and reaches well beyond the standard source materials. Although many of the best-known stories of Antarctic exploration are retold here (frustratingly often very briefly), Larson provides enough fresh perspective that even devotees of polar literature will learn things. ... Rather than recounting the story of the race to the pole chronologically, Larson concentrates on various scientific disciplines (like meteorology, glaciology and paleontology) and elucidates the ad­vances made by the polar explorers.

This month's Science Magazine has an equally glowing review, The Worst Science in the World:

On the surface, Larson's book offers a well-written, broad sweep of a mostly familiar story appropriate to the commemorative tone of the centenary. From previous histories of polar exploration, we all know, for example, who lives, who dies, and who suffers the most. What takes the book beyond the standard narrative is Larson's presentation of the British expeditions against the backdrop of the imperial geopolitics of the age, which made science an integral part of Antarctic exploration. Drawing on new sources, and at other times simply rereading familiar ones more closely, he retells the story of Antarctic exploration from the vantage point of science. Larson pays careful attention to scientific research that has often been down-played and at times been completely left out of historical understanding. What emerges is a far more interesting and richer account than we have had thus far. Through his considerations of work on magnetism, geology, paleobotany, paleontology, zoology (of course), and even ice itself, Larson argues that Antarctic exploration was not just filled with but in fact driven by science. This was especially true in the case of Scott and his Terra Nova expedition, whose primary motives Larson claims were not to get to the South Pole first but to instead garner scientific knowledge. ...

Larson's new interpretation, therefore, leads to a very different and more nuanced understanding of the story's protagonists, if not a radical reinterpretation of the Scott-Amundsen race. In redrawing the issues, reinterpreting motives, and recharacterizing the protagonists in such a well-known story, the book is not unlike Larson's earlier Summer for the Gods. That Pulitzer Prize–winning history gave us a newly complex portrait of the protagonists, their motives, and the sociopolitical backdrop to what became known as the Scopes “Monkey Trial.”

In short, Larson has written a fascinating book, one sure to force a rethinking of the Scott-Amundsen race as well as reconsiderations that will include science as a driving force in Antarctic and indeed polar exploration.

Listed below are links to weblogs that reference Summer Reading: An Empire of Ice: