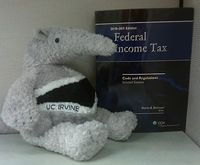 The Sixth Annual Junior Tax Scholars Workshop kicks off today at UC-Irvine with these papers: