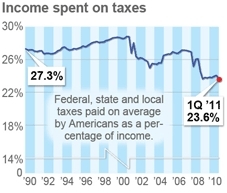 Americans are paying the smallest share of their income for taxes since 1958, a reflection of tax cuts and a weak economy, a USA TODAY analysis finds.

The total tax burden — for all federal, state and local taxes — dropped to 23.6% of income in the first quarter, according to Bureau of Economic Analysis data. By contrast, individuals spent roughly 27% of income on taxes in the 1970s, 1980s and the 1990s — a rate that would mean $500 billion of extra taxes annually today, one-third of the estimated $1.5 trillion federal deficit this year.

Listed below are links to weblogs that reference U.S. Tax Burden at Lowest Level Since 1958:

That's what happens when employment shifts from a high-paying dotcom economy to this one in which the company doing the most hiring is offering McJobs.

The article is wrong in its conclusion. The tax rate on todays' lower incomes is less, but the tax burden to families is greater, as people are forced to take low-paying jobs to survive and cannot afford the taxes.

Story selection is the primary manifestation of media bias. Given the 2-year lag in data release, we won't be reading about income inequality until at least 2013. It will be as if the subject never existed, except for articles that use only pre-2009 data. Saez can take a sabbatical this year.

And we are in a recession- I thought lower taxes for the rich help the economy?

Nick- What makes you think taxes are lower today for the wealthy than in the 1970s? The article doesn't say that.

These statistics are completely misleading. The federal marginal tax rates have not changed, nor has any other state, sales or excise tax rate, so why the decrease in revenue? More people are out of work and in the aggregate there is less income being generated, thus les tax is being collected. So, in the aggregate it can be made to appear that the "tax burden" is less per individual. This is sophistry at its worst.