We study grading outcomes associated with professors in an elite university in the United States who were identified -- using voter registration records from the county where the university is located -- as either Republicans or Democrats. The evidence suggests that student grades are linked to the political orientation of professors: relative to their Democratic colleagues, Republican professors are associated with a less egalitarian distribution of grades and with lower grades awarded to Black students relative to Whites. 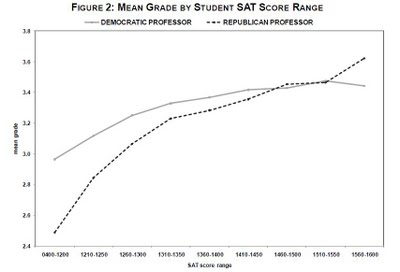 Listed below are links to weblogs that reference Republican Profs Award More High and Low Grades Than Democratic Profs:

Well, maybe no Republicans teach all those fluffy "truth is whatever you want it to be" humanities classes.

It's easier to give everyone a basically good grade when there are no standards.

What I find most interesting is at the left side of the graph. It would appear that the Democrat professors actually PUNISH the highest achievers--based on both the SAT scores and the Republican graders. Fascinating!!!

Well it DID indicate Arts and Sciences school, so engineering wouldn't be part of it, depends on if the hard sciences are in the A&S or have their own school in the university...

But the distro is interesting if there where 376 Dems, and 41 GOP, are you sure there is enough GOP for good data? Wouldn't a direct head to head be better? They also threw out all the Indies, and people for whom there was no way of figuring it. I'd be more convinced if they left the Indies/Non in there for comparison.

Interesting to think that there is an A&S elite school out there that is 90% Dem in the faculty... what do you think they are teaching?

Agree with the previous commenter; these results are pretty much noise unless you're looking at multiple sections of the same course taught by different professors. A bleeding-heart liberal teaching Appreciation of Feminist Poetry is going to produce a rather different grade distribution than my physics and computer science courses.

Like the man said, lets spread the wealth around a little bit...

You might look into whether Republicans are more likely to teach science and engineering than Democrats. My experience in teaching is that the courses that require mathematical analysis end up with a bigger grade spread than the ones I teach where the goal is to learn critical thinking.

I'm still amazed that we're worried about students not getting there money's worth, and people are doing research like this. But I seem to be alone in thinking this.

I find the inference very difficult to believe. There must be some hidden variables, such as characteristics of the course material.