New York Times, Are Taxes in the U.S. High or Low?, by Bruce Bartlett:

Historically, the term “tax rate” has meant the average or effective tax rate — that is, taxes as a share of income. The broadest measure of the tax rate is total federal revenues divided by the gross domestic product.

By this measure, federal taxes are at their lowest level in more than 60 years. The CBO estimated that federal taxes would consume just 14.8% of GDP this year. The last year in which revenues were lower was 1950, according to the Office of Management and Budget. The postwar annual average is about 18.5% of GDP. ...

In short, by the broadest measure of the tax rate, the current level is unusually low and has been for some time. Revenues were 14.9% of GDP in both 2009 and 2010.

Yet if one listens to Republicans, one would think that taxes have never been higher, that an excessive tax burden is the most important constraint holding back economic growth and that a big tax cut is exactly what the economy needs to get growing again. ...  The GOP says global competitiveness requires the U.S. to reduce its corporate tax rate. But the U.S. actually has the lowest corporate tax burden of any of the member nations of the OECD. 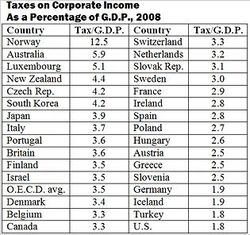 If taxes are low historically and in comparison with our global competitors, how are Republicans able to maintain that taxes are excessively high? They do so by ignoring the effective tax rate and concentrating solely on the statutory tax rate, which is often manipulated to make it appear that rates are much higher than they really are.

Listed below are links to weblogs that reference NY Times: U.S. Has Lowest Corporate Tax Burden of Any Western Nation:

The reason US tax rates can be so high, but collect so little, is that about 51% of US earners are fully exempt from any federal income tax. So rates are high for many of the highest earners, but relatively low (or zero)for much of the middle and working class. Looking at taxes as a percentage of GDP (as Mr. Bartlett does) makes the number seem historically low, but its not low if you are in that ever shriking group responsible for paying the whole amount.

@Dr.K: ? Were you answering me or someone else? GaryD, maybe? Read my post again. I'm not at all happy to spend other people's money. If tax receipts are down it is because taxpayer incomes are down, and the government will just have to do a better job of prioritizing.

@GaryD: taxpayer incomes are down, at least in the private sector, but so far teacher, policemen, and firemen pay and benefits haven't adjusted in the same way. Pensions in particular swelled during the good years. No need to fire anyone, we can just cut salaries and benefits, sharply. Think they can't survive on the reduced salaries? Private sector taxpayers have managed somehow.

2007 was our best year ever. We're down about 50%. While it is nice to discuss what was, we are living in what is which is FY2010 is closed & accounted for. Just because the stats haven't caught up doesn't mean we ignore the present.

And it's going to get worse.

Given Bartlett's background (just read the titles of his last few books) the conclusion in this article can hardly be viewed as objective. I could not easily locate the source study he's citing for this conclusion. He ignores the historical fact that US government revenues have averaged 19% of GDP since WWII, thus allowing the conclusion that individuals in the US have a greater burden of direct taxation than corporations. This is just another example of the press carrying the class warfare/distributive justice banner. There is never the reminder that if we in the private sector don't earn it, there is nothing for the government to tax.

Show us the way. Please write a chack for all of the excess money in your posession to the US Treasury. Since it is in excess of your basic needs, you can afford it.

Why are you so happy to spend other people's money rather than your own?

This just means the U.S. is collecting less money, which I think furthers the Republican argument that higher rates force income producing assets offshore and keeps tax revenues out of U.S. coffers.

To Nonce: Yes, when the alternative is to fire teachers, policemen, and firemen; close public parks and libraries; reduce student loans; and allow a 10%+ real unemployment rate and a disintegrating public infrastructure, the answer IS to raise taxes on those who can afford it.

To Mr. Sotir: First of all, he said 2008, not the years you gave, 2009 and 2010, so you're "knowingly" misrepresenting his argument. According to IRS data, corporate receipts fell by a miniscule amount between 2007 and 2008, yet total corporate income taxes after credits fell by almost a third (over $100 billion). The marginal tax rate argument is a strawman, as you well know. The author isn't advocating them and corporate tax receipts can easily be raised without touching them. By misrepresenting the author's argument you're playing the typical Republican game - close your eyes, cover your ears, and keep repeating lies.

Large businesses have tax lawyers on staff, GE has 600, and have lobbied hard for getting special legislation and special tax breaks. Most US large corporations pay no or extremely low taxes.

So the simple solution is to broaden the tax base by slashing all deductions, tax breaks and special favors and cutting the corporate tax to 21 % (the effective tax rate in Sweden). Large corporations taxes would be more than doubled and small business taxes more than halved. But what does Bruce Bartlett advocate. Status Quo. Taxes are not high. Big Government Republican and Big Corporattion shill Bartlett doesn't deny himself. When will someone stand up for the little guy as tax payer and small business owner against the machinations of government, corporations and their apologists?

I have yet to hear anybody refute the argument that "corporate income taxes" are paid by anybody but we, the customers of such corporations' products and services. That these are often offset by "loop holes" is only evidence that our money is being handed out to special interests by the corrupt gang in Washington. An elimination of all corporate income taxes would eliminate some of the cost of our purchases and the creative accounting and favoritiism, would it not? And would it not make the products of US labor and capital more competitive in the world market?

You are confusing "apples and oranges", and you have presumably done so knowingly.

Average tax rates are lower recently because the US economy has suffered from a recession. Tax losses of participants in hard hit sectors of the economy from 2009 (and 2010)reduced tax revenues in 2010 and will continue to do so for several years.

How are Republicans able to maintain that tax rates are excessively high? The same way they maintain that all those other non-true things are true. They just state a false fact; cling to that false fact in an unwavering manner, then have every other Republican repeat the same talking points, then have Fox News, the Wall Street Journal, the New York Post and every other Rupert Murdoch publication repeat the same thing. With this, roughly 40% of the American voting population will believe that untrue fact automatically -- and this goes up to 55% of they aren't really paying attention.