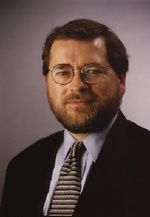 When members of the House Budget Committee gathered over sandwiches to meet with the leaders of President Barack Obama’s debt commission in Washington, former Senator Alan Simpson delivered a warning. “If you are in thrall to Grover Norquist,” the Wyoming Republican who co-led the debt panel said he told the group in February, “this country hasn’t got a prayer.”

There may be enough congressional Republicans enthralled with Norquist, a small-government advocate who has spent the last quarter-century pressing lawmakers to sign a pledge never to raise taxes, to kill any comprehensive, bipartisan deal to rein in the $14.3 trillion national debt, say current and former members of Congress. "Until Republicans are more afraid of the deficit than they are of Grover Norquist, we’re going to have a problem,” said Representative Christopher Van Hollen of Maryland, the top Democrat on the Budget Committee.

Norquist, 54, president of Americans for Tax Reform, says he has secured written pledges from 40 of the 47 Republicans in the Senate and 233 of 240 party members in the House. More than 1,300 state-level legislators, governors and even auditors have also signed, Norquist said. That includes Wisconsin Governor Scott Walker, Texas Governor Rick Perry and Ohio Governor John Kasich, all Republicans, he said.

Those who sign gain from Norquist’s support. Those who break the promise risk his wrath.

Listed below are links to weblogs that reference No-Tax ‘Zealot’ Norquist Emerges as Barrier to U.S. Debt Deal:

I'm not sure whether Reagan or Norquist has done more damage to the American experiment in democracy. It's a close call.