Just as the individual income tax falls more heavily on the affluent than the super-rich, so too does the corporate income tax. The giants of American business pay at lower effective cash rates than much smaller corporations. ... [This] issue has gotten zero attention in the hubbub that began March 24 with The New York Times exposé on General Electric Co.'s income taxes.

GE itself has said it paid no tax federal income tax last year, but complains it was maligned -- although it has been unable to point to a single factual error in the Times. We'll get to the dispute over how GE was treated, its response, and its statement that it is "scrupulous" about its worldwide tax compliance. But first let's look at the distribution of corporate income taxes, starting with a comparison of two of the best-known brand names in the country: GE and the New York Times Co. ...

The New York Times Co. made less than $2 billion in profit over the same 10 years and paid almost $1.4 billion in income taxes. That's a real tax rate of 71%, paid in cold, hard cash.

So the newspaper company that exposed GE paid more than twice the posted U.S. corporate rate, and its real tax rate was more than six times GE's real tax rate. [See data below the fold.] 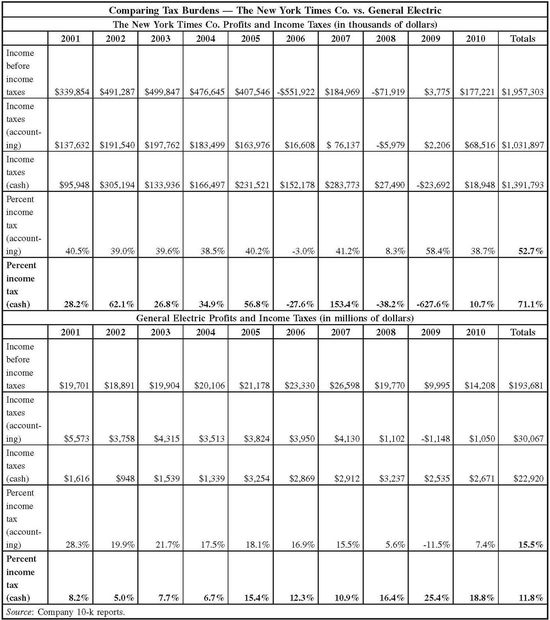 All Tax Analysts content is available through the LexisNexis® services

DCJ, rather than calling others "sad examples of civil discourse," look at the sad example of this article. There really was little worthwhile to discuss about the article, as it merely took two companies with entirely different operations and tax issues, and compared their tax results as though they should be the same but weren't, for reasons that we must all assume are sinister. Then, you try to disparage commenters, although that had nothing to do with anything...just typical liberal smearing. What a "sad example."

"critic" not "critique" -- we all need to respect copy editors, especially when we do not have one.

@ Bonzo, for example, we get a snarky observation that is devoid of facts (the capitalists who control the NYTimes are anything but "committed Leftists" and nothing to inform our debate about how we bear the burdens of government, which is to say of living in civilized society that makes earned wealth possible.

This will evidently shock Bonzo (so cowardly he or she dares not sign his name), but many of my best sources are very wealthy people who are troubled by what they see going on in our society, some of them lifelong Republicans who built huge fortunes from modest beginnings and some who turned big fortunes into bigger ones, but who also believe (as I do) that markets should drive their success and not our de facto socialist redistribution policies that take from the many and give to the already rich few.

@ Michael A. Livingston, I suggest you read my column at tax.com showing that a single worker making the median wage bears a total federal tax burden more than a fourth greater than the top 400 taxpayers in 2007, assuming your concern is for those down the income ladder, as your post seems to suggest, however obtusely. And also read my column on the Oregon lottery.

But, really, Mr. Livingston, corporations with $5 million in assets paying on average a real tax rate half again as high as those with at least 500 times as many assets is not a significant tax policy issue? Really? Do you really think that is not a revealing example of what an incoherent mess our tax code has become thanks to all these subtle favors put into the tax code at the behest of those at the very apex of the economy?

@ Don, thank you for making a positive and useful contribution to knowledge here, which ought to be the focus of those at this website for those of us who teach tax law. And yes, Don, the use of Delaware companies to hold intellectual property does suggest that the NYTimes Co. seeks to minimize or avoid state-level taxes, which is the domestic equivalent of the foreign tax havens issue.

@ Jeff, since GE itself has acknowledged to Agence France Presse and others the key fact of the piece is correct then I do not see serious flaws here and neither does Ryan Chittum, the very smart young journalist who daily dissects the follies and foulups of journalists.

And understand that I write this both as a well known and effective critique of bad journalism going back nearly 40 years and also having been through the intense editing process at The Times and other major papers many times, knowing that a single significant error would be the end of my career. That is a standard very very few people must meet and I know many fine reporters who are gone because of a single mistake (and a few outrageous examples of those who survived for a spell, but ultimately were pushed out).

I distinguish here between "investigations" that take on the personal venality of individuals from those that expose core policies pursued by powerful individuals and institutions, which is what watchdog journalism in my view should focus on: stories that save lives, stop systematic thievery on a grand scale, reveal policies that favor a narrow interest at public expense or that insulate calculated criminal behavior from law enforcement, for example.

@Sid
"All this is just another indication that decisions have consequences"
Please, to committed Leftists like the NYT decisions don't have bad consequences. Bad consequences are caused by oppressive heterosexual white males.

The problem here is that Mr. Johnston continues to confuse progressivity with the distinction between the "affluent" and "super-rich." The real issue should be the treatment of those people who are neither. It may be that the current system does poorly on this grounds, too, but the comparison between GE and NYT doesn't tell you much about that.

The New York Times should be proud and thrilled that it's paying the higher taxes that it has been advocating. Way to set an example!

Next thing, the paper will want limits on how much corporations can spend on tax planning. Can't have any of that legal avoidance stuff, you know.

BTW, this article proves absolutely nothing.

That sounds about right. All this is just another indication that decisions have consequences, overpay for acquisitions that should not have been done in the first place and there are negative results.

"GE itself has said it paid no tax federal income tax last year, but complains it was maligned — although it has been unable to point to a single factual error in the Times." It is possible to be misrepresented without there being "factual errors." I would have appreciated an analysis and rebuttal of the actual claims GE made in its several statements, rather than merely brushing those claims aside and suggesting that since it identified no factual error, that the original NY Times article did not malign. I look forward to this analysis.

One way to look at this is that the NYT high effective tax rate is the punishment to the shareholders of their erroneous investment decisions, particularly the purchase of the Boston Globe for a huge unjusitifed price. The write-down of that investment, which affected book but not tax income appears to be the major reason for their high tax rate.

An interesting analysis would be to compute the effective tax rate for the NYT without the non-deductible intangibles losses. It would be a lot closer to GE, but higher, illustrating the tax advantages of being a multi-national vs a largely domestic corporation.