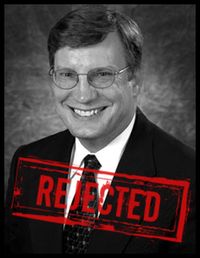 As Dan Filler (Drexel) delicately puts it, "Case has had some challenges with respect to deans in recent years." And now a public controversy has erupted over one of its dean search finalists:  Bradley A. Smith, Josiah H. Blackmore II/Shirley M. Nault Designated Professor of Law at Capital, a well known conservative campaign finance scholar and former chair of the Federal Election Commission under President George W. Bush.  When Professor Smith visited Case on March 24 for his day of interviews and meetings, opponents of his appointment launched CaseAgainstSmith.com (right). From the group's press release:

The website is organized by a group of Case Western Law students and alumni intent on opposing  Bradley Smith’s consideration, and or selection, to be the new Law Dean. Smith is one of four candidates in the final interview stage.

CaseAgainstSmith.com seeks to inform members of the Case Western Reserve University community about Smith’s radical views and history. Smith has been described as the “intellectual powerhouse” behind efforts to roll back Watergate era campaign finance reforms. Smith is also tied to the Koch Brothers – the very same individuals that have begun an unprecedented attack against the middle class in Wisconsin, Ohio, and nationwide. Senator John McCain of Arizona has even stated to Smith, ““You’re a bully and a coward, and you have no regard for the Constitution.”

We are concerned that the appointment of a radical such as Smith to Dean of the Law School could distract from the many strengths of Case Western Reserve University.

In order to to protect our school, we are asking visitors to the website to sign a pledge that they will withhold all support and financial contributions to Case Western Reserve University if Smith is selected as the next Law School Dean. This petition will be delivered to school administrators.

The Cleveland Plain Dealer has published this response from Professor Smith:

No dean candidate will be everyone's first choice, but having one's scholarship endorsed by the Supreme Court is hardly the mark of an "extremist." Case Western is a great school at a great university, and I felt quite welcome there and quite at home with all members of the community. One doesn't seek a deanship to advance a political agenda, and the school isn't choosing a political leader. The vast majority of the students, alumni, faculty, staff, and the administration will judge me on my merits as a prospective dean, my record of bipartisanship at the Federal Election Commission, my achievements, and the integrity of my writings and work, not by some political litmus test.

Calvin Massey (UC-Hastings) argues that "Brad Smith's political views have no relevance to his ability to be a Dean," and another commenter agrees:

Are Brad Smith's political views relevant to his ability to be Dean? No more so than if he held progressive views. When this happened in the UC system we saw the legal academy rally to Dean Chemerinsky's defense (rightly). Shouldn't we do the same for Smith before he's deprived a fair chance?

Case faculty and students were probably interested in having both a dean search, and a deanship, that was uncontroversial. Whatever the merits of this dispute -- and I for one share Calvin's view on the role of political viewpoint in a dean search -- its very existence is, shall we say, a bummer for Case. Worse, whatever the merits of the choice, the administration is now probably feeling pressure to extend an offer to Smith -- so that people don't conclude that the school rejected him based on anti-conservative bias.

Just another example that liberals hate diversity. If 100% of a law school administration is reflexively liberal, they're going to whine. I'd guess that 99% of law deans in the U.S. are big libs. But ONE conservative dean makes libs go apoplectic.

However, not in equal proportions...not by a long shot.

But not outraged enough to stop attacking professors on the Left or agitating against universities or public radio or anything else they disagree with.

Bull. It is the left that is far more intolerant and hypocritical in this regard.

Yet again, the only thought a leftist is capable of is projection.

Remember, conservatives believe that politics is just a small part of life.

For leftists, politics is a way of life. Every iota of their being is leftism.

The fact that everything leftists say is mere projection doesn't help either.

Of course people on the Right are outraged by the attack on Mr Smith for his views. But not outraged enough to stop attacking professors on the Left or agitating against universities or public radio or anything else they disagree with. It is perfectly fine to do that but please do not do it to them. And of course the Left has no problem attacking Mr Smith for his views but take extreme umbrage when someone dares to attack candidates. Everyone is outraged but no one is outraged enough to shut up. They defend free speech so long as it is speech that they agree with or makes them money. And pulling the old "taxpayers money" argument forgets to mention that we all pay taxes, left and right alike.

In retrospect, my decision to blog under a pseudonym was likely a bit overcautious. That said, political concerns were not my only motivation. As for the current issue, there is a difference between evaluating a tenure candidate's scholarship and assessing the qualities that are likely to make for a successful deanship, and reasons to suspect ideological viewpoints are more likely to color the former than the latter.

Let Case Western know thatt this alumnus will make no contributions to the Alumni Fund if Smith is turned down.

Prof. Adler, have yet to have you in a class and I agree with much you say, but it is an odd bit of defense from a man who chose to blog anonymously until granted tenure. Almost belies your point about ideology and the deanship, unless there is a bifurcation of the standards between faculty and dean that I do not know about.

FWIW, every member of the law school faculty with whom I have spoken about this has condemned the attacks, without regard to whether the support Brad Smith's candidacy. There is a widespread consensus that political ideology should play no role whatsoever in selecting the next Dean of the law school.

There is also an irony that those attacking Prof. Smith have chosen to remain anonymous, as there are few legal academics who have done more to champion and defend the right of anonymous speech.

So much for "free speech." If anyone is a conservative, it's suddenly a problem. I hope the university has the courage to tell these ideologues to take a hike.

Being rejected by Cleveland has an upside:

As a current Case student, I find the whole controversy rather stomach churning. I doubt anybody at Case would bat an eye at Smith if he was, say, an Ohio ACLU trustee who regularly wrote for the Atlantic. To aggrevate things, some think with the former Democratic Lt. Gov. in the mix as well its a perfect time to either score crass poltical points or lead an inquistion against other than lefty opinions.