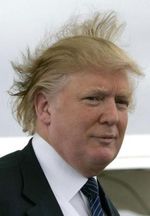 In a recent interview with Steve Forbes, Trump revealed his real heir concerns. These are very serious concerns over who will succeed his business:

Forbes: So, what do you do about succession? You have three up-and-comers.

But it’s very complex. In a way, it’s the most complex thing. And you understand that through your family, and your children, and you know, what’s going to happen here and there. . . .

Trump highlights a classic difficulty in dividing an estate among children: “do you leave a bigger chunk to one? Do you break it up evenly?” As he makes clear, there are no easy answers.

Listed below are links to weblogs that reference Donald Trump's Heir Problem:

Maybe Trump, today, by forcing the release of what I guess is a real birth certificate, solved the heir problem of Barrack Obama's parents.

lol, the pun in the title of this post is hair-larious.

I think the real dilemma for Donald is recognizing that Donald Jr. and Eric both have sub-90 IQs. Ivanka on the other hand appears incredibly intelligent. If he wants his legacy to live on, he has to give her the lion's share.

Breaking it up evenly, at least the part you don't give to charity, is the only way to avoid promoting discord among the heirs.