CTJ: America’s Tax System Is Not as Progressive as You Think

Citizens for Tax Justice, America’s Tax System Is Not as Progressive as You Think:

Conservative lawmakers and pundits often claim that the richest Americans are paying a disproportionate share of taxes while a huge number of lower-income Americans pay nothing at all. They’re wrong. 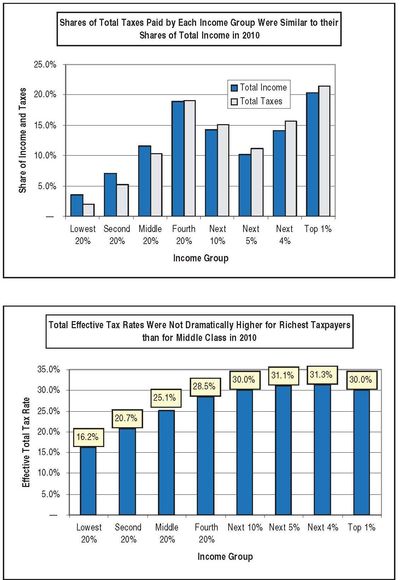 Listed below are links to weblogs that reference CTJ: America’s Tax System Is Not as Progressive as You Think:

The main "excise tax" that is so regressive is the tax on cigarettes. Of course the goal of Citizens for Tax Justice is not to identify and eliminate regressive taxes, but to hike income taxes.

The promise of social security taxes is of retirement benefits from the "lockbox" that are at least equal to the taxes paid. In the case of the poor, the return is much more than the amount paid in. If CTJ is prepared to say that social security should not be guaranteed (or will not be in the future because of the cost), then their analysis has some credibility. Otherwise, they prove the axiom that "statistics do not lie, but liars know how to use statistics."

This is true, but raises a question: why do people like CTJ focus so much energy on the income tax, which they admit is the most progressive, and relatively little on the remaining taxes, which are infinitely less so?

Well good for CTJ is noting that the corporate tax is ultimately imposed on consumers. My guess is that this study excludes wealth redistribution payments in the form of the EITC, other credits, social security, medicare/medicaid.