Like others in Congress and the media, Cantor, Bachmann and Pawlenty insist that American businesses are paying too much in corporate income tax. They claim the onerous tax burden is killing jobs and forcing companies to move abroad. To reverse the nation’s fortunes, they say, all Washington need do is slash the corporate tax rate, thereby reducing the amount of taxes these businesses are forced to pay. What’s scary is a growing number of citizens believe them. ...

One of the more egregious falsehoods being peddled by the corporate tax cutters is that companies doing business in the United States are taxed at an exorbitant rate. Not so. While the United States has one of the highest statutory rates on the books at 35%, the only fair way to measure what companies actually pay is their effective rate — what they ultimately pay after deductions, credits and assorted writeoffs. By that yardstick, companies in the United States consistently pay taxes at rates lower than corporations in Japan and many nations in Europe. ...

[C]orporate tax revenue in 2009 came to just 1% of GDP — the lowest collection level since 1936, or three-quarters of a century ago. In 2010, it edged up to a puny 1.3% — the second lowest since 1940. Even worse, the shriveled tax collections came at a time when corporations were registering an all-time high in profits. At the end of 2010, corporations posted an annualized profit of $1.65 trillion in the fourth quarter. In other words, the more they made, the less they paid. As for the corporate share of total income taxes paid by businesses and individuals, it has plummeted from 40% in 1950, the dawn of Middle America’s golden age, to 18% last  year. 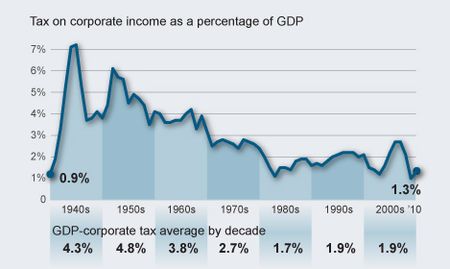 Listed below are links to weblogs that reference Are Corporations Paying Their Fair Share of Taxes?:

What I get out of this article is; that for all the calls for more tax breaks for corporations, we haven't seen these breaks directly translate into job creation. What has happened is more risk-taking and less re-investing than when companies paid higer taxes IF they didn't re-invest in the company. The incentive to re-invest to avoid taxation is no longer there- they simply off-shore the profits, invest overseas due to lenient tax policies, or increase bonuses for upper management including of course CEO's. The long-promised Trickle-Down theory never paid off. We actually witnessed more re-investment when there were higher taxes than now with taxes lower.

Pass through entities (including S corps) are not included in corporate receipts. There are a lot more of them as time progresses. Must be that double taxation on profits thing.

More journalists presuming to be tax law and tax policy experts. Note that their lament about corporate tax declining to 1% of GDP does not note that the rate is on worldwide profits (including those in low-tax jurisdictions). Another half-truth in the article (but not in the abstract) is the description of taxes paid by Carnival Cruise Lines, most of whose income is not US-source but is taxed, if at all, in a variety of countries including Panama, Bermuda, and the United Kingdom. Never let the facts get in the way of a good story, especially if it's a story that starts with a mild diatribe against Republicans.

Corporations do NOT pay taxes. They collect taxes.

What does this author think the corporate boards resolve to doing when a larger tax bill arrives? Make less of a profit? Ha! They pass that tax on to you and I - the consumer of their products and services. Or, worse yet, they lay off American workers and outsource that labor to other countries where the labor is cheaper.

You can charge corporations as much in taxes as you want Donald and James. As long as you realize they won't pay a nickle of it. You and I will.

Job growth is driven my demand for the product, not by how much a company is being taxed. Cut taxes for a corporation all you want but if they do not need workers to make products because no one is buying the products then they are not going to use that money to hire more workers they are going to dividend it out to investors or spend it or hoard it. The fiction that tax cuts create jobs is almost as big a fallacy as the idea that tax cuts raise revenue. AKA supply side economics. Same result--more deficits.

And since part of the world was in skirmish around 1940, wouldn't that have partially led to lower tax collections at that time?

As to 1950, can we really compare today's integrated trading to the aftermath of WWII?

Live in the now. We're not competitve anymore. I still find it interesting that TAX TAX TAX instead of lift some regulations is the default position. We've got too many regs in place. Take the caps off, and yes, that includes taxes. Let us do what we're capable of.

Especially since the EPA is on record that the dept. does not factor in potential lost jobs when deciding to put another layer of onerous legislation for the sake the false religion of man-made global warming. The vid was quite amusing.

Does the last paragraph quoted make any sense at all? Why compare annualized 2010 Q4 corporate profits with revenues collected in 2010 (presumably at least partly on the 2009 earnings of corporations)? Isn't that going to make the authors' numbers look much more dramatic, due to comparing figures from the height of a recovery (by annualizing Q4, instead of using actual figures over the course of the year) with tax receipts from an early, bleaker economic period?