Sullivan: The Rich Get 100 Times More Mortgage Subsidy Than the Poor

Beverly Hills is home to the stars. Clarksdale, Miss., is home to the blues. ... Beverly Hills 90210 and Clarksdale 38614 both have a population a little above 20,000. But that's where the statistical similarities end. The IRS compiles individual tax return data by ZIP code. The latest year available is 2007. The data show total adjusted gross income in 90210 was $5.6 billion, 20 times larger than the $266 million reported in 38614. In Beverly Hills, 47% of AGI are dividends and capital gains. In Clarksdale the figure is 7%. In Beverly Hills, only 4% of filers claim the earned income tax credit, while in Clarksdale 44% do. 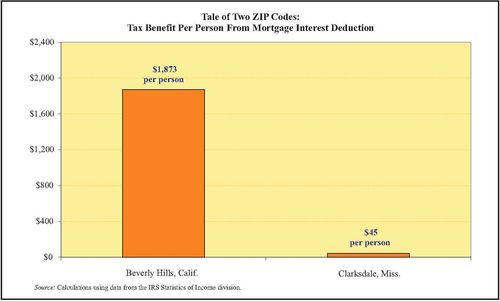 There are three reasons for this huge disparity. First, the rich have larger houses and larger mortgages than the poor. Second, the deduction is available only to itemizers. While almost all high-income taxpayers itemize deductions on their returns, very few of the poor do. Finally, the rich have much higher marginal income tax rates than the poor.

The gap in benefits between Beverly Hills and Clarksdale is only one example of the unfairness of the mortgage interest deduction. There are dozens of ZIP codes like 90210, with exorbitant housing. There are hundreds of impoverished ZIP codes like 38614, where the mortgage interest deduction provides only trivial benefits. Some examples are shown in the table. 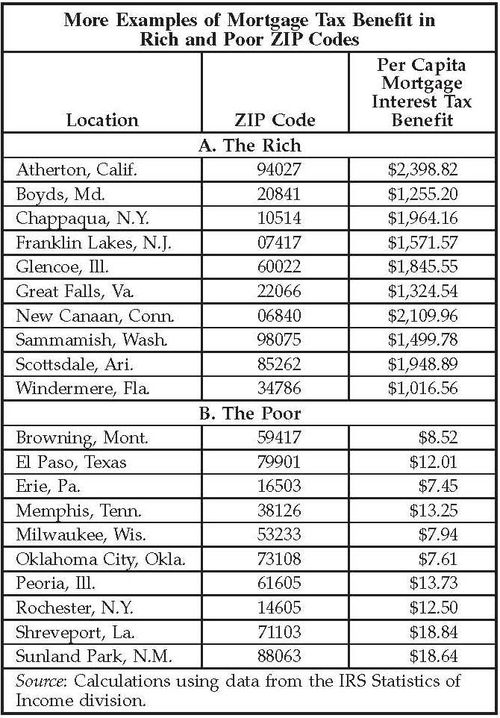 [I]t is fair to say that among tax experts, there is a consensus that the mortgage interest deduction should be trimmed and that the bulk of that trimming should come from high-income taxpayers with big mortgages who enjoy disproportionate benefits. But you will not hear any members of Congress calling for reductions in mortgage interest deductions. Just the opposite.

On January 6 Rep. Gary G. Miller, a Republican from Orange County, Calif., introduced H. Res. 25, "expressing the sense of the Congress that the current Federal income tax deduction for interest paid on debt secured by a first or second home should not be further restricted." There are 41 cosponsors, and the list is growing.

It is hard to believe that members of Congress who put a "do not disturb" sign on the mortgage interest deduction could ever really be serious about reforming the federal income tax. If you cannot even bring yourself to restrict one of our largest tax breaks, especially when those getting the lion's share of the benefits are those least in need, where do you propose we cut? Or perhaps, Mr. Miller, you like the code the way it is?

Listed below are links to weblogs that reference Sullivan: The Rich Get 100 Times More Mortgage Subsidy Than the Poor:

merita: that is not the median home price in washington, dc. i'm not paying 200k for a dump 700 sq ft condo. forget that.

Brian, the median home price in the U.S. is $158,800. http://www.realtor.org/research. The administration's proposal on limiting mortgage interest deductions was for families making more than $250k (<3% of US families) to limit their deduction level to 28%. http://money.cnn.com/2011/02/15/news/economy/mortgage_interest_deduction/index.htm
People living in $500k-$750k homes making more than $250k are doing comparatively very well (presumably because of their pristine character and nothing else, according to you) and don't need their housing subsidized by other taxpayers.

Statistics can be manipulated to support any position. I find it disheartening that an educated man would select one isolated statistic and draw such a conclusion on a complex-interlocked aspect of the tax code. What detrimental effects would occur with the elimination of the MID? How many construction related jobs will be lost when the "rich" decide against moving up? The effects of eliminating the MID without abolishing the current tax structure and replacing it with something like the "Fair Tax" will far exceed the perceived benefit.

by reading this article it almost makes you think that the home mortgage deduction is such a bad thing and all we are doing is helping the rich get richer ,, some how I think if you talk to the regular guy on the street that benefits from able to use mortgage deductions as well on his taxes he would not be up for the idea about eliminating them the reality is the rich seem to benefit more due to the numbers you are talking about its all a matter of perspective..http://geneperez.net>Santa Maria Real Estate

Peoria still has Caterpillar. Those who still have a job make good money, cheap housing compared to the greater Chicago area, & their wives didn't have to work full time to pay the bills at least the mid-00's. There was an article on the disparity between Chicago & downstate IL a few years ago. Now Cat is suggesting they may move because of the new taxes.............

the thing is about going after these rich, aka these multimillion $ homes, is that they start talking going after people in 500k-750k homes who are trying to make a decent living, and aren't exactly 'rich'.

anyways, there isn't anything stopping those poor people from becoming rich except themselves.

The disproportion is, as the authors concede, a function of three factors: home value, itemization, and marginal income tax rates. These factors are embedded in the design of the mortgage interest deduction. It is a consequence of this design that the deduction is greater for taxpayers in higher tax brackets. Or, if you like, the amount of the deduction and a taxpayer's wealth are proportional. So, what we have in this deduction is a disproportional result from a proportional design. To make this deduction "fairer" to lower income taxpayers, the design must be made disproportionate, that is, unfairness in one quarter to produce fairness in another.