Tax Homage to the Big Dance: Fill Out Your Tax Code Bracket

[T]here has never been a bracket of IRS sections, at least not until now. In an effort to remedy that glaring bracketology lacuna, I have taken it upon myself to select 64 (no play-in games for the code) of the finest, taxpayer-friendly sections and pit them against one another to determine the code's "most useful" section (with the occasional upset or two along the way). This is, of course, a subjective exercise (feel free to replace some of my choices with your own); but since it was my idea, I am going to choose the official champion. However, to heighten the suspense (and let the many office pools begin), Tax Notes is here publishing only my 64 nominees; next week the Sweet 16 will be revealed, then the Final Four, and ultimately the victor.

April Madness will give you the opportunity to baffle and impress your friends when they ask whom you've got "winning it all." "I've got municipal bond interest over qualified dividends," you can say, "although it certainly wouldn't surprise me if reorgs or charitable contributions made a run." 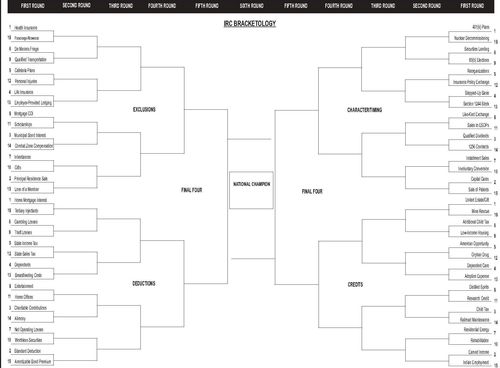 Listed below are links to weblogs that reference Tax Homage to the Big Dance: Fill Out Your Tax Code Bracket:

» Tax code tournament brackets from Don't Mess With Taxes
I am not a basketball fan, pro or college, so I just muddle through NCAA March Madness, flipping around to channels showing late-season hockey matches and Major League Baseball spring training games. But Robert G. Nassau has come up with a way that eve... [Read More]