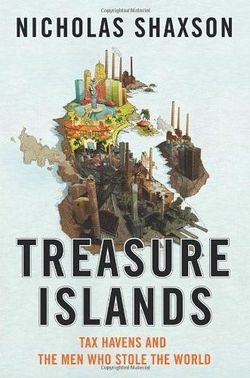 Parag Khanna has frequently discussed the rise of a neo-feudal age, with power devolving from nation-states to cities. Why are nation-states losing relevance?

One important reason is that tax havens are diverting ever more revenue away from social needs. Powerless to confront the wealthy or powerful corporations which take advantage of them, states must tax their middle classes more or cut services. Many authors have noted the proliferation of tax havens in recent years. But one rarely sees the literal trappings of feudalism re-emerge, as Nicholas Shaxson describes in his provocative account of the “City of London Corporation:”

The term “tax haven” is a bit of a misnomer, because such places aren’t just about tax. What they sell is escape: from the laws, rules and taxes of jurisdictions elsewhere, usually with secrecy as their prime offering. The notion of elsewhere (hence the term “offshore”) is central. The Cayman Islands’ tax and secrecy laws are not designed for the benefit of the 50,000-odd Caymanians, but help wealthy people and corporations, mostly in the US and Europe, get around the rules of their own democratic societies. The outcome is one set of rules for a rich elite and another for the rest of us....

According to US PIRG, in 2009, citizens of Wisconsin saw $1.6 billion in taxes shifted to them because “many of the largest corporations in our country hide profits made in the United States in offshore shell companies and sham headquarters in order to avoid paying billions in federal taxes.” Given that environment, cuts in pay and benefits for teachers, janitors, and other public workers are a foregone conclusion.

Listed below are links to weblogs that reference Pasquale: Tax Havens and the Wisconsin Budget Impasse:

Ted when did practice 20+ years ago. Please forgive me but as others have pointed out you have some facts wrong however, I am not here to do that - my point is simple. Since the US tax Code allows for US tax deferral of foreign income why is it wrong? I mean if I find a free parking spot for my car when almost all street parking is metered would anyone blame me for parking in a free spot? How is it then that we blame multinationals who legally structure their operations to reduce their global tax bill or effective tax rate? If you disagree with the laws change the laws!

@ Professor Seto: PIRG does appear to be peddling tripe. The first claim I fact-checked by PIRG wound up being false. They base their claims of lost revenue from corporate tax haven abuse on a report from Senator Levin that estimates lost revenue from use of foreign banks. The footnote makes clear that half of the total is due to evasion by individuals and the other half is avoidance by corps. PIRG falsely claims that the Levin report tells us that it's all avoidance by corps. So, yeah, it's tripe.

Sorry bearerfriend but Professor Seto's response contains several major errors. "For historic reasons (basically, the UK threatening to impose an economic embargo on California if it tried to use formulary apportionment to tax Barclays Bank), US states are limited to water's-edge taxation."

The Barclays case (1994) dealt only with foreign owned multis, like Barclays, Sony & Nestle. The Container (1983)case dealt with the application of the world-wide formula to US multis, like Haliburton or GE. So Barclays and the UK threats had NOTHING to do with the taxation of US multis complained of by the article above and by PIRG.

Second, I believe (supported by a quick review of Hellerstein & Hellerstein) the UK threat was not to embargo the world's 8th largest economy (CA) but was to cancel the US/UK tax treaty.

Fourth, state tax adminstrators will tell you that WW unitary fell out of favor because of 1) its complexity and 2) its unpredictablity. WW unitary requires that foreign sales, property and salaries be converted to US dollar equivalents - a mammoth task. Secondly, as the major currencies rise and fall against the dollar, currency arbitrage has the effect of increasing or decreasing CA unitary take, causing the revenue stream to be even more unpredictable than normal.

And fifth, US states are not LIMITED to water's edge taxation - the state's have allowed an election of water's edge rather than WW unitary taxation. (AK was a hold out for a long time, but I don't deal with AK returns much.

Didn't W lower the tax to around 5% and it brought in more money than they thought it would? I thought I read they expected around $150-200b and got in around $400b?

There are several false premises here: first, that profits from activities outside the US must be taxed in the US; second, that taxes are not costs that should be managed; and several others I don't have time to list. Of course, the terms the argument -- "neo-feudalism" -- are metaphorical bunk.

Thanks for thoughtful response, Professor Seto! Very illuminating. It's fun to read a blog where scholars actually debate these issues in (almost) real time, rather than the year long gaps between replies in the world of academic publishing.

As a former big firm tax partner who was paid large sums to reduce the tax liabilities of multinational corporations, I feel compelled to respond to "Patrick." Unfortunately, the facts underlying PIRG's claims are not "tripe." I probably would not use the provocative language PIRG uses. But multinationals routinely structure their affairs so as to park profits offshore. Sometimes they use shell corporations. For example, at the height of the Gulf War, Halliburton had two Cayman Island shell subs (not listed in its SEC filings) that it used to drain profits from its Iraqi operations on the off-chance that Iraq would attempt to tax those profits. So far as I am aware, none of those profits were ever taxed by the United States. What's worse, however, is when the offshore corporations are not shells - when the multinational actually moves jobs and plant offshore to reduce its worldwide tax liability.

For historic reasons (basically, the UK threatening to impose an economic embargo on California if it tried to use formulary apportionment to tax Barclays Bank), US states are limited to water's-edge taxation. This means that if multinationals park profits offshore to avoid federal income taxation, they also effectively avoid state income taxation.

Reasonable people can disagree about whether corporations should be taxed at all. If one agrees that they should, however, the opportunities our current rules afford for parking profits offshore significant undermine the revenues both the states and the federal government receive from the corporate income tax.

I haven't read this book (yet), but the excerpt here is a bit simplistic. If there's no benefit at all to the Cayman Islands, then why does it adopt these rules? Is there really a clear line between what the Caymans are doing and what (say) Minnesota or South Dakota would do if they adopted lower taxes than Wisconsin and encouraged businesses to move there? And is the latter always and invariably a bad thing? I'm not sure.

Wikipedia says that "The classic François-Louis Ganshof version of feudalism[2][3] describes a set of reciprocal legal and military obligations among the warrior nobility, revolving around the three key concepts of lords, vassals and fiefs. A lord was in broad terms a noble who held land, a vassal was a person who was granted possession of the land by the lord, and the land was known as a fief. In exchange for the use of the fief and the protection of the lord, the vassal would provide some sort of service to the lord."

How "neo" is this tax feudalism? Is the only reason to us the word "feudal" because the authors thesis is that the rich "lord" it over the rest?

No rigorous analysis would use the US PIRG as a source for anything. Is this part of the recent "Michael Moore" position that Wisconsin is not broke - we merely need to seize the money from the fuedal lords. As Mr. Moore said, it's our asset more than it is theirs.

I'm a little surprised that you even link to this. I don't expect that as a tax prof you are an economist, but surely you appreciate that this is complete tripe?