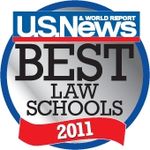 U.S. News & World Report has teased the March 15 release of its annual law school rankings with an advance look at "the first ever ranking of law schools by hiring officials at the country's top law firms. ...  [T]he U.S. News survey ... was sent last fall to 750 hiring partners and recruiters at law firms who made the 2010 Best Law Firms rankings produced jointly by U.S. News and the publication Best Lawyers. The response rate was 14%.". U.S. News released the Top 25; the Top 100 will be published in the 2012 law school rankings:

Listed below are links to weblogs that reference BigLaw Hiring Partners and Recruiters Law School Rankings:

On the Family Feud -- they survey 100 people. Here, they had 105 responses. So I guess this is roughly as scientifically valid as a Family Feud survey question.

Is that response rate considered adequate to give a meaningful survey? And what was the geographic distribution of the surveys? 'Cause I did BigLaw recruiting and hiring at Houston firms for a dozen years in the 1980s and 1990s, and I can assure you that Iowa and Minnesota and North Carolina were NOT on our radar screens at all -- as in, not only did we never go there to recruit, we never even received unsolicited resumes from those schools. And quite a few others -- e.g., Cornell, Northwestern, Boston College -- were names we knew and that we'd take seriously if we received a resume from students at those schools, but where there was so little interest in Houston that we couldn't possibly justify doing on-campus recruiting there.

This survey seems to me to ignore the very substantial regional factors that still powerfully affect legal employment. Yeah, for the top 10% at top-20 schools, there may be a genuinely national legal marketplace, but for everyone else, it still matters -- A WHOLE LOT -- where you go to school and where you plan to practice. BigLaw firms in Houston and Dallas regularly hire from several Texas-based law schools that don't make the top 25 on this list; if you want to end up with a job at one of them, you'd be far better off going to the University of Houston or SMU than to Penn or Georgetown, even though the latter are more selective and rank far higher on most national polls.

1. What was the geographic distribution of the responses? My work in the area suggests that almost all law schools are regional. Harvard is the one obvious exception. Historically, US News' practitioner survey has been heavily weighted to the east coast. We do not know, for example, whether the survey form went only to the national law firm's head hiring official, or whether it went to the regional hiring officials (who actually do the hiring). We also do not know who answered.

2. The ranking is apparently not weighted by size of firm. My most recent update indicates that DLA Piper has 3,949 lawyers. By contrast, Schwabe Williamson & Wyatt, the 250th largest firm in the country, has 164 lawyers. Are the responses of these two firms weighted equally?

The more interesting ranking would be the law schools of those people who have left or are at biglaw with a book of business in excess of $2M. Those are the rainmakers you want. Not as easy to survey though.

No offense, but how would recruiters know which law schools are academically "the best?" The best for THEM, maybe. Looks like they went for the easiest sells.

The response rate was 14%??? And they also sent it to "recruiters" (who typically are not attorneys)?? Sheesh. I'm not sure I should care what these people think...