The Subcommittee on Consumer Information of the ABA Section of Legal Education and Admissions to the Bar Accreditation Committee has released its draft report on revising the ABA accreditation standard regarding employment data:

Attached is a proposed new Standard 509(b) regarding employment data, and a chart we propose that each law school be required to fill out and post on its website on an annual basis. This new Standard will, if adopted, provide more meaningful and consistent employment information to prospective students. We believe that this information will greatly assist prospective students in making informed decisions about whether to go to law school or which school to attend. Because almost all of the information to be disclosed is already gathered by law schools, the burden on schools will be minimal. ...

Over the past few years, there has been a great deal of criticism directed at law schools for their public presentation of employment information. Much of this criticism is warranted. Too much information is presented in a potentially misleading fashion. The most significant problems fall into one of two categories:

Schools receive salary information from a fairly small percentage of graduates. Graduates reporting their salaries are skewed towards those earning the most. Therefore, the median known salary of a school’s graduates is likely to overstate (often significantly) the median of all graduates who are employed. The same is true when schools disclose a median salary of graduates in private practice, because respondents are skewed towards those in large firms. A school that touts median salary information, without appropriate qualifiers, is misleading prospective students. We propose that all salary information clearly indicate the number of respondents and percentage of all graduates included. The Questionnaire Committee is considering taking a different approach: not gathering school-specific information and instead relying on national statistics. The thought is that the number of graduates responding with salary data at individual schools in individual categories may be too small to be meaningful. We disagree and hope that the Questionnaire Committee will require this information from schools. We would not require schools to disclose any salary information for a given category unless there are at least five respondents. 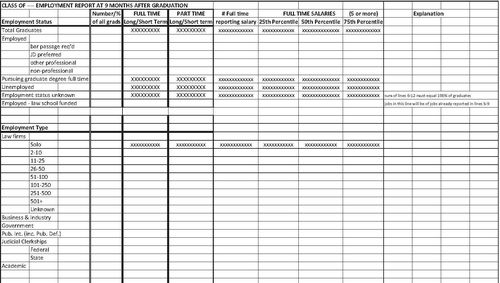 If any of the new employment standards are implemented in fall 2011, U.S. News would collect the more detailed employment and salary data and incorporate it in the next edition of our law school rankings methodology. U.S. News believes that while this proposal does not solve all employment data issues, it would make significant improvements to the current rules. U.S. News urges the ABA to take action.

In the most recently published new Best Law Schools rankings, U.S. News changed the methodology for how we compute J.D. employment rates for 2009 graduates, in an initial effort to publish employment data that is more reflective of the job market for new J.D. graduates compared to our previous calculation method. In the past, new J.D.s counted as employed at graduation and at nine months out if they were working full or part time in a legal or non-legal job or pursuing additional graduate school education after their J.D.; so did 25 percent of those whose status was "unknown."

Now, both the at-graduation and nine months after employment rates are figured solely based on the number of grads working full or part time in a legal or non-legal job divided by the total number of J.D. graduates. Also, those who are not seeking employment are now counted in the calculation as part of the total number of J.D. graduates; previously, they were excluded from the size of the graduating class and the calculation. Those in graduate school don't count as employed in this year's calculation.

U.S. News believes that this calculation is a more realistic presentation of the employment data that is currently available to us.

Listed below are links to weblogs that reference ABA to Change Employment Data Reporting; U.S. News to Adopt in 2013 Rankings:

Here is what they should do:

Make the school give everyone a randomized number. Then, as of a certain day, require the school to post a list of the numbers along with the current annualized salaries. INCLUDING unemployed at "0". Unknown should simply be reported as 0, giving the schools a large incentive to go out and get the information. They have the resources, they just don't want to do it.

If every school posted every grad randomly with a salary, then you would have a true representation of how the class is doing. Otherwise, even this new standard can be manipulated.

Including this information is a start but it is only part of the picture. They should also include student loan debt for 9 months out, 5 years out, 10 years out, 20 years out and 30 years out if they want to give applicants a realistic picture of what to expect.

I never suggested that less information is more; I argue that worthless information is worth less. The fact that I dane to consider that USN should even count this fraudulent data for 5% of its ranking methodology puzzles me now. What give something worth 0% any value in ranking the school.

For the record, I do not have the pedigree I'd like and I have friends who do. Basically the only difference between us is the names of our law school. The opportunities they received and have advanced into I have not because they're from a top 10 school and I am not, but I am not so far back. People see Harvard and Yale and they *do* look at it differently than [fill in school #50/100/150 here]. Actually, in many instances school 50 will not be looked at much differently than school 100 or 150 because it is not top 10, so you do not count.

I am so far removed from the schools that I do not know what they are excreting. I do know that what jobs there are to be had now do not go to those who are not in the top ten in the junior ranks all tat frequently. and not surprisingly the same tends to be true in the upper ranks as well given the tightness of the market.

When these places needed warm bodies they took many people from many places -- many to many people. But make me a list of Supreme Court clerks who went to school outside the to 25 (I know one Justice used to hire some from the outside, but I don't think anyone else did). Doesn't that say something about pedigree?

I am not saying I like it. I am not saying it is right. Hell, I've been f*cked by it enough times that if I never said or wrote the word pedigree again in my entire like I would how sound justification for doing so. The illusion of reputation *is* real -- for good or for bad (I think for bad). The "no one cares what grade you got in torts 5 years from now" speech during 1L is a load of crap. They care about grades, they care about schools, they care about law review and they care about every other credential that makes your pedigree better than someone else to win the beauty contest.

I have never done the ROI calculation based on pedigree. But I know my cousin by marriage who has the pedigree. I know what car he has. I know what house he has. I know where he has that house. I know that his wife who never wanted to work a day in her life never has and never will have to. I see what their kids have. I see what vacations they take. Trust me, right now a $100k is nothing to him. It is a fraction of what he will make this year. I would hazard a guess that he has grossed easily between $3-5M over 15 years. I think $100k is nothing to him now.

I know of someone who went to top 10 years and years ago. After 3 years out of school he said, not too brag but kinda to ask what to do, he buys crap like $500 sunglasses because he didn't know what to do with all his money (he'd paid off his loans, he'd maxed out his 401(k), he put more money into the market and he still had a ton of cash).

Is everyone from top 10 going to pay off their debt or get a job, I don't know. I do know it is a sh*tload easier than if you ain't top 10.

Could not disagree more with Tax Guy, who seems to argue that less information is somehow superior to more.

Do people feel that way about 10k's? The tax code?

I do agree that "less is more" if the schools are pumping out misleading data (which they have been).

But to throw up our hands and say it is *impossible* to generate more accurate, reliable employment/salary data and that it is somehow better to allow the schools to slither back behind the opaque, velvet curtain of "pedigree" (of course, *surely* Harvard grads must *all* make at least x, justifying y hundred thousand in debt, I mean, who, really, would be so *gauche* as to ask these men of impeccable breeding, unquestioned credentials, and fatal conflicts of interest to prepare such a barbaric relic as an actual...*accounting*...good god!) is to play into well manicured hands of these white shoe scam artists.

Try ball-parking an ROI based on the slender reed of "pedigree" - a calculation that you are likely wagering over a hundred thousand (borrowed) dollars on.

False confidence in fudged numbers is bad, utter faith in the "reputational" miasma excreted by the "pedigreed" schools (an ever expanding coven) is worse.

why not just relegate job data to the worth it deserves--virtually nothing (say 5% or less in the scoring of a school). Although it arguably is a very important statistic to a person choosing to go to law school, the legal market from the time of application to the time of graduation (4 years) can change remarkably. Classes of 2008, 2009, and 2010 applied to law school in 2004, 2005, 2006. Is any data from 2004-2006 relevant to employment reality during 2008-2010 (even at the best of schools).

The legal hiring market ebbs and flows. People enter school in bust markets and leave in booming markets (e.g., enter 1995, graduate 1998 with a tight market turning to a looking for bodies market and Gunderson raises changing the associate pay scale immensely) and vice versa. Pedigree, however, is pedigree. Applicants ought to know whether they choosing between a school that is between 30-40 vs. 90-100 vs. 3rd or 4th tier.

Pedigree is about the only important thing an applicant can learn about and decide upon. So leave the employment stats out so prospective lawyers can make reasonable decisions about what law school to choose. They need to know whether it is worth it to go to #30 instead of #60 where they get a half scholarship or instead of 3rd tier where they get a full ride. Given what law school debt is for many, going to a lower school with less student loan burden may be a better choice than going to the best school they get into (which I always recommend when asked, but that is just me).