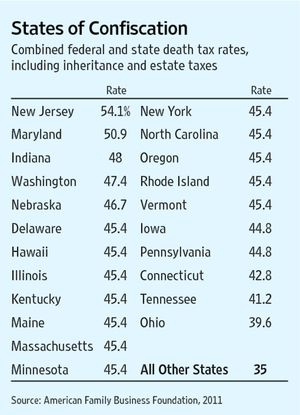 The new law applies a top federal death tax rate of 35% with a $5 million exemption for 2011 and 2012. But it also changed a federal credit for state death tax rates into a federal deduction. The credit allowed a dollar-for-dollar reduction in federal taxes for state levies as high as 16%. This meant that every dime from state tax collections came from Uncle Sam. It was essentially a free tax for states.

By contrast, the deduction merely reduces the amount of federal taxable income and thus sharply reduces the amount of state tax that can be written off federal taxes. Many states have estate taxes at the old 16% threshold which now means an effective 10 percentage point or more surcharge above the 35% federal rate. This surcharge is even higher in states that also have an inheritance tax, which is levied on the value of specific property bequeathed to heirs, in addition to the estate tax (which is levied on the value of the entire estate).

Our friends at the American Family Business Foundation have done the math on the interaction between the new federal rates and these state taxes, and you can consult the nearby chart to see your state's fee for the privilege of dying. No wonder the battle over death taxes has suddenly moved to state capitals, with Indiana, Nebraska, Ohio, Pennsylvania and even Rhode Island looking to repeal their state levies this year. ...

The federal death tax will revert with a vengeance to 55% in 2013 unless Congress acts in the next two years. But in the meantime, states like Indiana and Ohio, and especially New Jersey, can help their economic recovery by eliminating their death taxes and inviting lost wealth to return.

Listed below are links to weblogs that reference WSJ: Death Tax Ambush:

Media bias? Lost wealth to return? I cancelled my WSJ subscription because of articles like these. These people do not leave- if that was the case a mass exodus would take place from New York City to Nevada and it is just not happening. This "pamper" the rich attitude has got to stop. I propose a "flat tax"-they like the idea-10% of your NET WORTH to taxes each year..its in the bible...(sort of)...they like that too...

You mean if you live in New Jersey and have a $100 million estate your heirs, who did nothing but enjoy the accident of birth, have to get along with just $45 million?

Well, hopefully these states will repeal their Estate Tax and replace the revenue with an increase on the sales tax on food or something like that which will protect multi-million estate.