Judge Harry Edwards famously disparaged the usefulness of law reviews in his article The Growing Disjunction Between Legal Education and the Legal Profession. In that article, Judge Edwards explained that “[o]ur law reviews are now full of mediocre interdisciplinary articles. Too many law professors are ivory tower dilettantes, pursuing whatever subject piques their interest, whether or not the subject merits scholarship, and whether or not they have the scholarly skills to master it.” And it is not just judges who warn of declining judicial interest in law reviews. In 1998, attorney Michael McClintock published an empirical study in the Oklahoma Law Review that backed up the general sense of decline with hard numbers (“Oklahoma Study”). The Oklahoma Study found that there was a 47.35% decline in the use of legal scholarship by courts from 1975 to 1996. A more recent study by the Cardozo Law Review found that, in the 1970s, federal courts cited to the Harvard Law Review 4,410 times; that, in the 1990s, the number of citations dropped by more than half to 1,956; and that the precipitous decline continued well into the first decade of the twenty-first century. ...

Our hypothesis is that the theories underlying—and therefore, the basic methodology employed by—the recent citation studies are fundamentally flawed and that by altering the methodology, a different, less dire picture will emerge. It turns out that our hypothesis has merit. Our data indicate that judicial citation of law reviews might not be in decline at all, and that in some cases, just the opposite might be true. Our presentation will proceed in five Parts. In the interest of providing context for the subsequent Parts, Part I offers a short, general history of law review citation by courts, including the debate surrounding its decline. Part II describes a ten-year update to the 1998 Oklahoma Study, using the same methodology as was employed in that study. Part III then highlights and discusses several possible explanations for the apparent decline in judicial citation of law reviews. Part IV compares the traditional citation study methodology with our methodology and explains how our methodology attempts to account for the explanations provided in Part V. Part V analyzes our results and reflects on them. Finally, the Study concludes by considering the institution of the law review in light of our results and by asking how law reviews might adapt to the changing legal landscape to ensure their continued vitality. 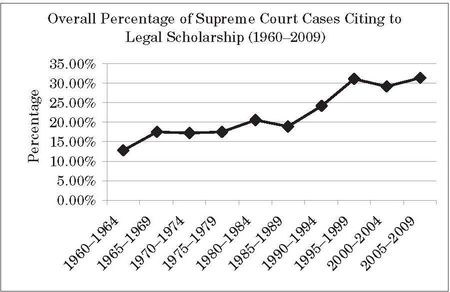 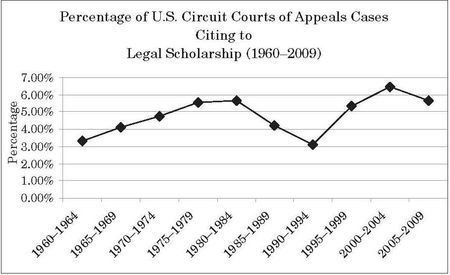 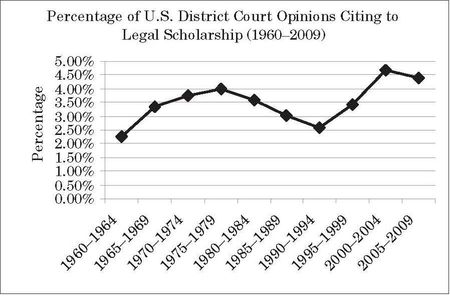 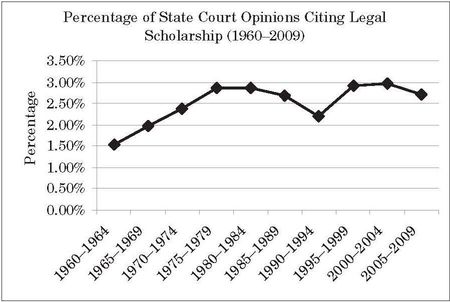 Listed below are links to weblogs that reference Law Reviews Are Not Dead: Judicial Citation Patterns:

I work for a large corporation. We were just looking at an unfavorable state tax rule described in administrative guidance. I wondered what impact Mayo had on interpreting state rules. Are federal administrative law precedents relevant? I didn't know.

In a quick search I turned up a 2009 YLJ article that was very helpful. So I'll disagree with the poster above, and say the law review articles are only mostly a waste of time and resources - not completely.

Let's be honest, in most cases, the supreme court is even less relevant than law review articles. They have a lot of power, yes, but they decide so few cases -- especially in tax -- that they are essentially irrelevant. And that doesn't get to their ridiculous opinions that -- much like law review articles -- drone on and on.... They are bad literature at best.

Take out citations to law review articles by the supreme court, and the true picture emerges. Law review articles are a waste of time and resources. Essentially no one reads them -- yet alone relies on them. They are not even accepted by the real academic community, because they lack academic rigor (summarizing precedent and then adding a tiny amount of "analysis" doesn't live up to academic standards -- just being honest here).

Practitioners do not read them because they typically are not useful to resolving real life problems. Moreover, with tax, there is already enough case law and regulations to argue almost any position. In my 20 years of practice, I have never cited a single law review article.... I have never seen another practitioner do so either.

It is time for the legal academy to realize that their "product" has very little value. To the professors reading this, I say, get a job. Figure out what taxpayers really care about, and write articles about that. They still will not be accepted by the real academic academy, but at least you can help resolve real issues for real people.