Thorndike: The American Tax Tradition of 'Soaking the Rich'

Americans like to tax the rich. As a nation, we rely more on progressive taxes—and less on regressive ones—than any other developed country. We impose no broad-based consumption tax, standing firm against the global popularity of value-added levies. But we make ample use of corporate and individual income taxes—touchstones of progressive politics for more than a century. Our national penchant for progressive taxation has deep roots in American history. ...

It's one thing to say that American politicians have been taxing the rich for more than 200 years, but what were they trying to achieve? Were they seeking to redistribute wealth, to recast society along more egalitarian lines? Or were they simply trying to ensure that rich people paid their "fair share"? The answer, predictably, is both. 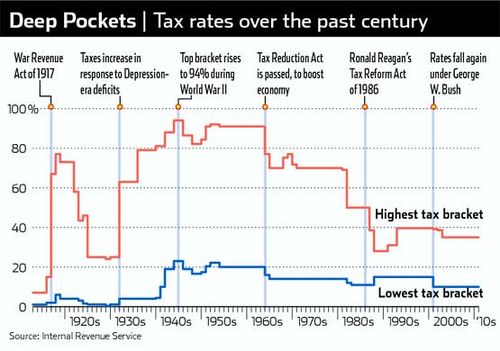 American political leaders have defended progressive taxation on narrower grounds, using it to remake the tax system, not society. No one made the case more succinctly than Rep. Cordell Hull, legislative father of the 1913 income tax. "I have no disposition to tax wealth unnecessarily or unjustly," he explained in his memoirs. "But I do believe that the wealth of the country should bear its just share of the burden of taxation and that it should not be permitted to shirk that duty."

Listed below are links to weblogs that reference Thorndike: The American Tax Tradition of 'Soaking the Rich':

The tax burden has been shifted for the last 30 years from the "rich" to the middle class. Most of our tax policy and tax debate has centered around cutting taxes for the wealthy on the grounds of many promised, but not delivered goods. It will trickle down. Wrong, it trickled up. It will provide jobs. Not a shred of evidence that that is the case. The class warfare that come have commented on has in fact been waged by the wealthy and their highly paid lobbyists for years against the middle class/working class. They have a whole political party and several news orgs dedicated to waging this war. So it is not accommplishment envy it is self defense against people who want a free ride. There is no free lucnch and it is about time the people who eat the most paid the tab.

If wealthy Americans have accepted lower returns to get lower taxes (a strategy which makes no economic sense whatsoever) then how does one explain the extraordinary growth in income and wealth by the highest 5%, 1% and .1% of taxpayers?

It is true that the share of taxes paid by the wealthy has grown substantially in the last decade, but this is only because their income has grown at such a great rate. Their tax rates have gone down. Share of taxes paid is a meaningless measure, designed to hide the fact that tax rates for the ultra-wealthy have been reduced while at the same time their share of national income has been steadily rising.

The reason this is bad economic policy is not because of a "soak the rich" mentality. It is because economic growth and prosperity cannot exist without growth in income of the lower and middle income groups, whose consumption generates investment and employment. Brazil, India and China, are experiencing strong economic growth even though income distribution is skewed heavily towards the wealthy because they have growth in real income amongst the lower and middle class groups.

Sid, effective rates are not accurate measures either. As any tax lawyer or financial planner will tell you, the rich will simply shift their income to sources that are tax-favored - often accepting lower rates of return in exchange for the reduced taxation (or deferring recognition of gains, potentially until death). So they may pay less taxes, but they also make less gross income than they otherwise might have. This also has the unfortunate effect of distorting investment decisions and capital allocation in our economy.

While imprecise, the share of taxes paid in relation to the share of income earned is probably the best measure of how the tax burden is shared.

As has been discussed several times on this Blog, startutory rates are fairly meaningless, what is important is the effective rate.

I guess I have the wrong idea of what "soaking the rich" means.

The argument, of course, is over the definition of what is a "just share" of the burden of the cost of government.

The first comment demonstrates that quite adequately. Unfortunately, I think the comment is somewhat off-target: because the level of wealth necessary to get that kind of response from a legislator has virtually no correlation with the defined tax brackets. We hit people making multiple hundreds of thousands at the same rate as we hit those making multiple hundreds of millions, and multiple billions.

In other words, how the "rich" are defined is subjective and relative. Until the class who truly "own" government is precisely defined and identified, progressive taxation is merely a rationalized form of confiscation out of ill-concealed class and accomplishment-envy.

I have worked for a lot of rich people, and they live in a different world.

For example, if I call my Congressman's office about an issue the best I can hope for is a return call from a junior staffer or an intern.

If my wealthy clients call they get a return call from a Congressman.

The wealthy own the government, so perhaps they should pay for it.