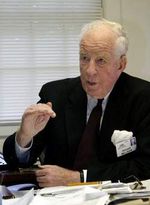 Textile tycoon Roger Milliken ducked the taxman upon his death almost a century after his grandfather lost a landmark legal fight with the U.S. government over sheltering a fortune from the estate tax.

The 95-year-old Milliken, chairman of Milliken & Co., one of the world’s largest closely held textile, chemical, and floor-covering manufacturers, died in a Spartanburg, South Carolina, hospice on Dec. 30, less than 48 hours before a temporarily lapsed federal tax on multimillion-dollar estates was to be reinstated.

Milliken’s fortune now will pass to his heirs with no estate tax. “The timing of his death surely benefited his heirs and the company,” said Jock Nash, Milliken’s Washington lobbyist on trade issues for 25 years. “His timing was impeccable.”

In 1916, his grandfather, company co-founder Seth Milliken, sought to avoid the newly created estate levy by giving shares of the company to his children. He died in 1920. The U.S. Supreme Court in 1931 ruled that Seth Milliken’s gifts were subject to the estate tax.

“These are people who have made efforts to avoid estate taxes for nearly a century,” said Columbia University law professor Michael Graetz. ...

Forbes previously estimated Mr. Millikin's net worth at $1 billion, an amount that placed him on Forbes annual list of the richest 400 AMericans until 2008, when the threshold for making the list topped $1 billion for the first time.

Listed below are links to weblogs that reference Roger Milliken Died on Dec. 30, Beat Estate Tax on $1 Billion Fortune by 48 Hours:

Information from a search engine, just for Joan.

Obama himself admitted that end of life counseling would be needed and that even his grandmother probably shouldn’t get hip replacement surgery at her age and condition.

Just because something isn't specifically identified in a bill doesn't change the laws of economics about its required allocation of scarce resources. You're living in a dream world if you don't think that senior citizens will be denied care if the cost/benefits don't exist in the eyes of a government hack.

I agree with Warren. What is almost always excluded from the 'repeal the estate tax' people is the fact that the heirs will pay eventually due to the lack of a step up in basis..and if you can't prove your basis, say in that land your dad bought way back in 1940 or so, your basis is zero.

I can't believe you allowed the inane comment by "Woody" about "Obama death panels". No such provision ever existed in any form in the health care reform legislation as proposed or as finally enacted. The opponents of health care reform made this bogus claim because one version of the bill provided that insurance could pay physicians for the time spent explaining end-of-life issues and options to patients and their families if the patients wanted this discussion. At present most insurance policies will not pay for a physician's time for holding this very important discussion.

You forget to point out that his heirs will not have a stepped up basis on the assets he left except for $1.3 million dollars. They will be paying income tax on the difference between the cost of the assets when the decedent purchased them compared with the sales price at the time of sale. This compares to the situation if he had died on January 1, 2011 when the first $5 million was exempt from estate tax and his heirs would have had stepped up basis.

The Obama "Death Panels" would never have allowed this to happen. They would have kept him on artificial life support until one minute after midnight on January 1.