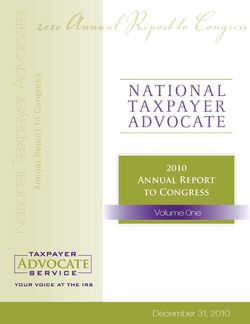 The Most Serious Problems Encountered by Taxpayers: Top 5 Issues

The Most Serious Problems Encountered by Taxpayers: Issues 6-21

I am speechless by the report from the NTA to the IRS with their recommendations? Do they honestly believe that by writing a "new mission statement" to include social programs this is going to make a DIFFERENCE to the Taxpayer? Tell you what, NTA send me an email and I will write you a new IRS Mission Statement for FREE!!
This will save you and the IRS time and money which helps save the Taxpayers money - oh yeah my money. Call it a volunteer position.

Taxpayer Advocate is all hat and no cattle. Most recent example: Client qualifies for $8,000 primary homebuyer credit; files return in May; receives "math error notice" (as allowed by statute) in late July disallowing it based on IRS computer records showing the real estate (value $25,000) she owns in another state, 1200 miles away. Letter to IRS in early August requests notice of deficiency so Tax Court case can be filed. Form 911 in late December results in call from TA offering sympathy but nothing else; thousands of other taxpayers are in the same situation, and a batch of 2010 returns with same issue are on their way. Austin SC has been "researching" it, and will respond in 45 days. Client has substantial assets and is assured she is earning 5% interest while IRS dawdles; she points out that she could have earned 10% in an equity index fund.

You're wasting your breath to hammer on the IRS - it isn't accountable to any of us. The problem is Congress and the Oval Office. IRS is just the instrumentality by which they raise money, and the agency does what it's directed to do and it is graded on how well it's doing at separating us from our money under rules articulated by Congress, to meet budget requirements set by Congress working with the President (OMB really). Yep, it's abusive - which is how Congress likes it. That way you focus on the mechanism by which Congress separates you from your money, and get some emotional satisfaction but no recourse, rather than focusing on the 535+1 people behind the curtain and holding the power of the ballot box over their heads.

The suggestions regarding new measurement tools are pie in the sky. First, I doubt there exists a metric that truly captures how effective a program is in improving overall tax compliance within an industry segment. Second, IRS executives aren't stupid, they will quickly figure out how to game any measurement statistic to make their organization look better than it is.