For the past couple of years we have needled the Harvard Law Review (HLR) about its tendency to err on the side of inflation when describing the size of its subscriber base. So, it seems only fair now to salute the HLR’s recent correction, and to note that the extravagant circulation claims made these days by the Virginia Law Review make the HLR’s old claims seem downright modest. This year we are offering two new perspectives on the law review business. The first is really just a bigger version of an old one. We have added several law schools’ flagship law reviews to our little tables of journal circulation rates. The newcomers are: Boston University Law Review, Emory Law Journal, Minnesota Law Review, Indiana Law Journal, Illinois Law Review, Notre Dame Law Review, Boston College Law Review, Iowa Law Review, William and Mary Law Review, George Washington Law Review, Fordham Law Review, Alabama Law Review, North Carolina Law Review, Washington Law Review, Washington and Lee Law Review, Ohio State Law Journal, UC Davis Law Review, Georgia Law Review, Wisconsin Law Review. We also corrected a few errors in earlier versions of the tables and filled in a few blanks, an exercise that will doubtless be repeated in the future. The second new perspective is a look at the distant past, when only a few law reviews published any circulation numbers. A casual review of some of those early numbers, in tandem with an equally casual glance at the advertising pages of those early law reviews, provides an ironic reminder of a plausible piece of conventional wisdom about the decline in sales of print editions of law reviews: that the decline has been and is being caused by the rise of searchable electronic databases and of an Internet via which to conveniently tap into those databases.

[T]ake a look at the graph on page 550. It shows the trends in paid subscriptions at three leading law reviews — the HLR, the Yale Law Journal, and the Columbia Law Review — for which we have at least some data from the 1960s to the present. (The graph is prettier than it ought to be because we have filled in the blanks and smoothed the curves for each journal by assuming that its circulation rates in years for which we lack data are the same as the rates in the immediately preceding years.) The gray bar cutting across all three circulation trend lines marks the period during which Westlaw advertisements began appearing in the law reviews. Correlation does not indicate causation, of course, but it is hard to resist the thought that the appearance of that ink-on-paper Westlaw advertisement in the November 1979 ink-on-paper HLR marked what might eventually turn out to be the beginning of the end for the ink-on-paper HLR, and for ink-on-paper law reviews more generally. 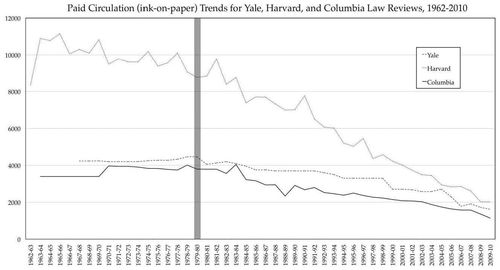 Listed below are links to weblogs that reference Law Review Circulation Continues to Plummet:

It would be interesting to compare the number of citations with the decline in circulation.

I would wager citations have been increasing as the whole point of journal articles, for the most part, is not to write anything meaningful but instead fill the page with citations.

There were a lot fewer lawyers around in 1960, so if you did a graph of paid circulation per lawyer over the years, the graph would look much much worse

Well of course this trend roughly parallels the decline of all subscriber print media generally, especially newspapers. There are just more, faster, and cheaper outlets for legal commentary and scholarship today, especially with the rise of blawgs. The law reviews themselves have responded by posting short blog-like commentaries to print articles online. Also, with searchable full text of articles available on Westlaw and Lexis, paper becomes obsolete. On the other hand, the law reviews might temporarily slow the decline by publishing compilations of their online commentaries in printed form (which, coming back full circle, becomes searchable on Westlaw), giving them the same cachet as scholarly full length articles.

With the rise of SSRN, it's hard to see the point of law reviews other than as a means of conferring status or bragging rights on an article. On the other hand, the system does guarantee that at least one person (the editor) reads the article. I would be interested to see a test conducted on how many SSRN downloads actually get read.