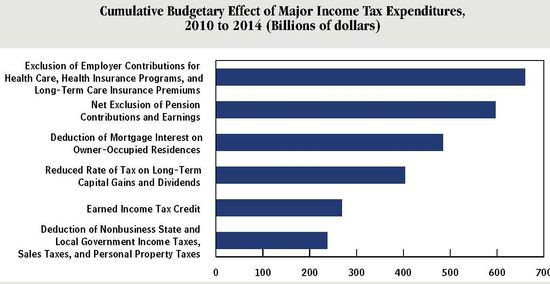 A variety of exclusions, deductions, and exemptions in both the federal individual and corporate income taxes cause the individual and corporate income tax bases— the amount of income subject to taxation—to be significantly smaller than the income reported on tax returns. For example, the most comprehensive measure of income reported on individual income tax returns is gross income—and even that measure omits certain types of personal income that taxpayers are allowed to exclude from reporting. Gross income totaled $8.4 trillion in 2008, but once the allowable deductions and exemptions were subtracted, total income subject to tax (taxable income) was $5.7 trillion—or 67 percent of gross income. In addition to the exclusions, deductions, and exemptions, both the individual and the corporate income tax allow for tax credits that reduce the final tax paid by families and businesses. All else being equal, those provisions of tax law reduce tax receipts by hundreds of billions of dollars each year; as a result, tax rates must be higher to collect the same amount of revenues that would be collected in the absence of those provisions.

Income tax exclusions, deductions, exemptions, and credits generally fall into three broad categories: those that modify taxable income to exclude the costs of earning that income, such as an employee’s deduction for work-related expenses; those that subsidize or promote certain uses of income that are deemed worthy, such as the deduction for charitable contributions; and those that provide tax relief on the basis of certain income or demographic characteristics, such as the earned income tax credit for lower-income working families and the child tax credit for families with children.

Some of those tax provisions are termed “tax expenditures” because they are similar in some ways to government spending. Like spending programs, tax expenditures provide financial assistance to particular activities, entities, or groups of people. They are more similar to entitlement programs than to discretionary spending because they are not subject to annual appropriations and any person or entity that meets the requirements can receive the benefits.

According to estimates by the JCT staff, the largest tax expenditure is the exclusion of employers’ contributions for health care, health insurance premiums, and longterm care insurance premiums (see the figure to the right). Although such contributions are part of employees’ total compensation (and are deductible by firms as an expense in calculating their corporate income tax liability), they are exempt from individual income and payroll taxes and are thus excluded from employees’ taxable income. The forgone income tax revenues from this tax expenditure are projected to total $659 billion in 2010 through 2014; forgone revenues from payroll taxes will be significant during that period as well. (Health care also receives favorable tax treatment in other ways: Medicare benefits are excluded from taxable income, and taxpayers’ medical and longterm care expenses that exceed a threshold amount may be deducted.)

The second largest tax expenditure is the net exclusion of pension contributions and earnings, which are estimated to total about $597 billion from 2010 through 2014. Most contributions to pension and retirement plans are not included in employees’ taxable income, nor is the return on the assets accumulated in those plans. Rather, most pension benefits and withdrawals from retirement accounts are taxable when the benefits are paid or the money is withdrawn.

Although typically considered a tax expenditure, the net exclusion of pension contributions and earnings raises the issue of the appropriate base against which to measure the exclusion. A comprehensive income tax base would include income when it was earned; thus, it would comprise income contributed to a pension or retirement plan as well as income from returns on assets in the plan or retirement account. However, an alternative base might not depend on income but instead depend on income minus savings, or consumption. Measured against that kind of base, the exclusion for pension contributions and earnings, a form of saving, would not be considered a tax expenditure.

Homeowners may also exclude from taxation as much as $250,000 (or $500,000 for a joint return) of any capital gain they realize when they sell their primary residence. The revenues forgone are estimated to be about $86 billion from 2010 through 2014.

Corporate tax expenditures reduce revenues by much less than do individual tax expenditures. The largest corporate tax expenditure—estimated to total about $71 billion over the 2010–2014 period—is for the deferral of taxes on the active income of controlled foreign corporations (that is, income earned by a foreign subsidiary of a U.S. multinational corporation). Although the federal government taxes the worldwide income of U.S. businesses, that active foreign income is not subject to tax until it is remitted to the parent corporation as dividends.

The second largest corporate tax expenditure is the deduction for domestic production activities, which is projected to result in $43 billion in forgone corporate tax revenues from 2010 through 2014 (and an additional $19 billion in individual income tax revenues). U.S. businesses that are engaged in certain types of domestic production, such as manufacturing and other specified activities, may deduct from their taxable income a percentage of the income they earn from those activities.

Listed below are links to weblogs that reference CBO on Tax Expenditures: