This paper presents initial data from a major empirical study of U.S. law professors conducted under the auspices of the American Bar Foundation with additional funding from the Law School Admission Council. The study combines a national survey of tenured law professors (Phase 1) and in-depth follow-up interviews with 95 of those professors (Phase 2). Here we report on tenured professors’ views regarding the tenure process itself. Although over 70% of these professors felt that the tenure process was fair, our results suggest that the perceptions of female tenured faculty members and tenured faculty of color differ significantly from those of their white male counterparts. Both female professors and professors of color perceived the tenure process as less fair and more difficult than did male or white professors. Female professors of color had the most negative perceptions; interview material suggests some reasons for this pattern. In general, the interviews conducted during Phase 2 give us insight into the differing perceptions revealed by the quantitative analysis. Both qualitative and quantitative data also point to cohort-related effects as affecting how gender and race influence professors’ perceptions of the tenure process. The existence of a differentially minority and female group of professors who are disaffected regarding the tenure process fits with findings in an earlier study regarding satisfaction among law students. It also forms part of a picture that is emerging from recent research regarding differential rates of exit from the legal academy before tenure of scholars of color. 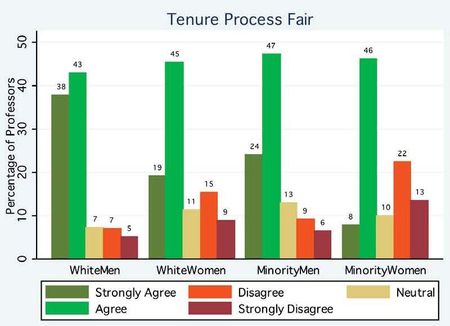 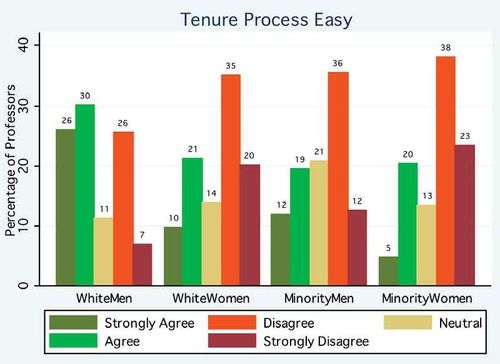 Listed below are links to weblogs that reference Women and Minority Law Profs Think Tenure Is Less Fair, More Difficult:

I'm sure this is true in reality. It's amazing how people underestimate sexism in this country

There's a pretty obvious problem with women in that the pretenure years tend to coincide with what otherwise would be prime childbearing years. Indeed the entire idea that you work your head off at ages 28-35 (33-40?) and then coast for the remainder of your career is much more geared to men's than women's lifestyles. You can game this a bit by starting earlier or later, but it's hard to escape that this is a model created without most women in mind.

The graph and the data seems likely unpredictable. These professors seems to really know what they are into. And white men and women are somehow agreeing strongly on this tenure stuff. But still the minority is not to be taken for granted for their awareness can make the world go round. Who knows if these data are really somehow truthful but still it looks pretty intimidating in terms of the agreeing process.

In related news, 90% of American Idol winners believe that the selection process is fair. They also agree that the competition is fierce.

Back here on planet Earth, I can't believe that anyone would spend money to survey winners of anything about the selection process. How could the result be anything other than ego-driven approval?