Bruce Bartlett (The Fiscal Times), Cooking the Books: The 2010 Deficit Was $2.1 Trillion:

If corporate accountants used government rules for their financial statements, they’d be jailed. That’s why we rarely see the real number of the federal deficit—a terrifying $2.1 trillion last year. ...

In principle, changes in the cost of long-term commitments should be included in the budget, as they would under accrual accounting. The Financial Report takes a stab at doing so and finds that it would have almost doubled last year’s budget deficit from $1.3 trillion to $2.1 trillion. 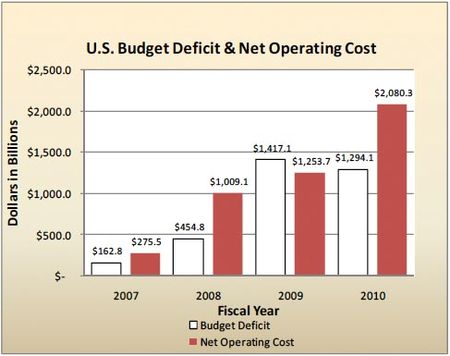 "After the U.S. government assumed control of Fannie Mae and Freddie Mac—two federally chartered institutions that provide credit guarantees for almost half of the outstanding mortgages in the United States—CBO concluded that the institutions had effectively become government entities whose operations should be included in the federal budget. In contrast, the Administration, which ultimately determines what is included in the budget, considers Fannie Mae and Freddie Mac to be nongovernmental entities for federal budgeting purposes. Because of the differing budgetary treatments, CBO’s and the Administration’s budget estimates related to the entities were quite different for 2009 and over the 2010-2019 period."

If Fannie & Freddie were consolidated on the Governments books, as would absolutely be required by GAAP, it would add about 10% of GDP to the Government's public debt levels. They are messing with the books and one Governmental unit has already called out another on the issue.

Did you hear anything from the press about this issue?

Yes, that is a rhetorical question.

What an absolute mess!

Curious how Bartlett, who recently has inveighed so mightily in favor of raising taxes, contrary to views he expressed earlier in his career, now presents evidence that contradicts his basic thesis that politicians may be trusted with money earned by the people.

Although the GAAP financial statements are informative, showing the price of keeping commitments to pay benefits, one could argue that cash accounting is equally valid. The reason is that governments can and will renege on their financial commitments when necessary.