WSJ: GOP Should Just Say No to the FAIR Tax 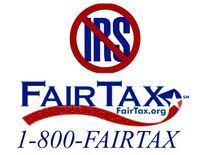 Public anxiety over rising taxes is helping Republicans in this midterm election—with one exception. Democrats are trying to turn the tables on the GOP over the so-called FAIR Tax, a tax reform idea that has bounced around conservative circles for years.

The proposal would end all current federal taxes, junk the Internal Revenue Service and impose in their place a 23% national sales tax. In 16 House and three Senate races so far, Democrats have blasted GOP candidates for at one point or another voicing an interest in the FAIR tax. ... FAIR tax proponents are right to say these Democratic attacks are unfair and don't mention the tax-cutting side of the proposal, but the attacks do seem to work. ...

This is a political reality that FAIR taxers need to face. ... No one supports tax reform more than we do, and in theory a consumption tax like the FAIR tax is preferable to an income tax because it doesn't punish the savings and investment that drive economic growth. If we were designing a tax code from scratch, the FAIR tax would be one consumption tax option worth debating.

But we live in a country that already has an income tax, and most states rely on sales taxes for a major part of their revenue. Unless the Sixteenth Amendment that allowed an income tax is repealed, voters rightly suspect that any new sales tax scheme will merely be piled on the current code. Adding a 23% federal sales tax on top of a 5% or more state sales tax levy would also be a huge additional tax on all purchases. The temptation to avoid such a tax by paying cash or via other means would be high, and collection might require the same army of auditors that the IRS now deploys. ...

Our advice to the FAIR taxers is that voters will start to take the idea seriously once the income tax is on the road to repeal. Until then, our advice to candidates would be to avoid the FAIR tax and focus on goals that are more achievable and less politically self-destructive.

Listed below are links to weblogs that reference WSJ: GOP Should Just Say No to the FAIR Tax:

For those who would like more info, go to www.fairtax.org or www.fairtaxnation.com

I'd like more money in my paycheck, wouldn't you?

To the Critics of the Fair Tax:

Those over fifty have spent there entire lives working and having a minimum of 23% taken from their paychecks without their choice or without their consent as to the rate and, if they have managed to have a retirement account, they're taxed once when they earn the money and again when the benefits are paid, even with a tax-deferred account.

Under the Fair Tax, those same workers will be able to work without the penalty of taxation and receive a permanent minimum pay raise of 23%. Those living with retirement funds, as are most seniors, will receive the unexpected windfall of not being taxed on their retirement benefits. Furthermore, since used items are not taxed, they have more control over their effective rate of taxation and anyone with a valid Social Security # can apply for the prebate which assures no one pays taxes on necessities.

For the poor, the end of the income tax and payroll deductions means the end of their hinderance to getting out of poverty. Even for a poor man whose total income for a year will only be around $7,000 dollars will have the same minimum 23% of money deducted from his paycheck. The more he makes, the more that will be taken. He must then wait for a year, then be out the expense of filing a return and 'rapid refund' costs to claim his own money for which he has already worked. When he is laid off, after being taxed once for paying for unemployment benefits, he will be taxed again when receiving unemployment benefits. If he manages to save any money in a savings account for 2% interest, he'll potentially be taxed on the interest. How does a poor man escape poverty without working and saving?

Critics often argue that it would be easy to invade and that there would be a huge blackmarket. I disagree. Over 45 states currently have a sales tax. The Fair Tax operates similarly. Since it is only collected at the final point of purchase, the number of filers will have been reduced by @ 90%. Most of those collect the tax are large chains such as Walmart. The reduction in number filers alone improves fraud and evasion detection abilities of the taxing authorities. Those making purchases will be doing so with more money in their paychecks, a choice to buy used and avoid the tax, and a monthly prebate. Why 'blow a good thing?' Compare with current evasion rates when the IRS has to track over 150 million filers. Since companies are familiar with sales taxes and they're not 'letting anyone slide' today, why would Walmart love you so much that they would 'let you slide' under the Fair Tax and risk fines, penalties, and a potential loss of the company's ability to do business in the United States? Also, I doubt the mafia, street gangs, etc. are going to start packing new washers and dryers around to help people avoid a 23% sales tax, when guns, drugs, prostitution, etc. are far more profitable. Anyone who doesn't want to pay the tax must provide a 'sales tax permit' to avoid payment. To get the permit, requires registration and compliance with the requirements of the Fair Tax; not worth the effort for the avg. joe on the street.

An advantage for consumers is the fact that the Fair Tax also eliminates the tax on corporations and the reason for higher prices caused by the compliance costs as well as the taxes themselves. Critics will say that prices will rise. However, can a company sell a $1 widget for $5 and make a lot of money? What if his competition is selling the same widget for $.50? Under the Fair Tax, there would be no advantage to price gouging because a company's competition could always undercut another's prices.

The WSJ does not fully understand the Fair Tax or recent developments on it. It is likely that much of the Fair Tax will we taken out on the employer side, with employers paying lower gross salaries, while raising net wages and raising prices by the same amount. The real problem is that the math on the Fair Tax is a bit off - although this can be overcome by leaving a residual income tax in place for higher income individuals, say the top 90% of income earners - at a graduated rate between 4% and 28% (the top rate staying a bit high because most income over $55,000 per year is saved, not spent, and therefore not subject to the Fair Tax until way down the line. Additionally, the rate really does need to be about 13% as a price increase and 33% as a levy on corporate income - although some of that would never be collected but instead used to pay the prebate through employers rather than through the government.

There are too many Democrats in power to ever have the Fair Tax as a single tax or as low as the Republicans want it. It will also never pass as the implict 30% government spending cut - as dictated by the requirement of revenue neutrality. It must either be expenditure neutral (we are at war, after all) or it must be recognized to be a spending cut.

I am convinced that the main attraction of the Fair Tax is the belief that one can easily avoid or evade it. Somehow the proponents forget that everyone else will be able to do the same, causing a collapse in revenues. The tax as proposed is unstable, due both to enforcement problems. Also, several low-rate taxes are less economically damaging than one high-rate tax like the Fair Tax.

Is the FAIR Tax a Political Liability? - by Dan Mitchell

I will continue to defend the FAIR tax and other national sales tax proposals that replace the income tax, but I wonder whether this is a losing battle. Every election cycle, candidates that endorse (or even say nice things about) the FAIR tax wind up getting attacked and put on the defensive. Their opponents are being dishonest, and their TV ads are grossly misleading, but they are using this approach because the anti-FAIR tax message is politically effective. Many pro-tax reform candidates have lost elections in favorable states and districts, largely because their opponents were able to successfully demagogue against a national sales tax.

...FAIR tax proponents presumably could defuse some of the attacks by refocusing their efforts so that repealing the income tax is the top priority. This would not require any heavy lifting since all honest proponents of a national sales tax want to get rid of the 16th Amendment and replace it with something that unambiguously prohibits any direct tax on income. So why not lead with that initiative, and have the national sales tax as a secondary proposal? This is what I propose in the video, and I think it would be much harder for demagogues to imply that a FAIR tax would mean a new tax on top of the corrupt system that already exists.

The whole issue of Republicans and tax policy will be very interesting to watch in the new Congress. Obviously the sentiment is antitax. But what does this mean when one has real responsibility, and what taxes are worse than others?

At last....someone who makes some sense. I am totally in favor of the Fair Tax but the noted problems need to be overcome. Political problems in doing so....that's why we want to kick out the current crop of politicians who couldn't fix their own broken shoelaces.

Should we not figure out how to get out of Iraq, Afghanistan, Korea, Germany, England, Spain, etc., etc., Apparently these issues are too political as well. We need politicians who want to fix problems, not get rich at the expense of the few of us who actually pay income taxes.

The fair tax is (mostly) promoted by people unfamiliar with taxes. Some random problems with the fair tax -

1. 50+ year olds have paid tax on their income (source of their savings) already. Now as they spend their savings, they get whacked again. Political suicide as soon as the 50+ people figure out what is going on.

2. Fair tax theory is that they elimination of the income tax will cause companies to price cut because their income tax burden has been removed. The US auto industry will pay no taxes in the forseeable future nor will hi-tech (deductible options) industries.

3. Price cuts in industries are problematic. If they don't kick in at once, there will be massive purchasing and inventory issues as the price of goods increases 23% overnight.

4. Foreign crude is not subject to US tax. OPEC will not cut prices because the US income tax is eliminated. What effect will having the price of gasoline abruptly increase have on the US economy?

5. Talk is that a consumption/VAT/sales tax is easier to administer and less fraud. Talk to someone in Europe - there estimates of fraud start at 20%.

6. Extremely regressive. Some talk about providing a rebate to lower income levels. How can you determine if you qualify for a rebate - requires some form of income tax filing.

There are more - but have you ever heard any of these issues being discussed by Fair Tax proponents? They like to talk about eliminating the IRS - an atavistic and naive comment.

Taming and simplifying the monster is hard work and lacks an organized voting base. Magical thinking - pass a 23% consumption tax and POOF! our problems disappear - is not an adult response.