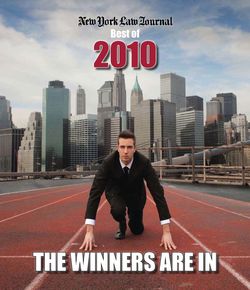 Here is the New York Law Journal's description of the rankings:

[The rankings] are not a scientific survey of the marketplace but rather purely democratic. We asked you to vote for your favorites – and did you ever. With over 2,000 votes, the response exceeded our expectations. The voting was conducted via online ballot, compiled by the sales and marketing teams of the New York Law Journal. ... We took great pains to ensure the voting was fair. Any nonattorney or legal professionals (or anyone who we could not validate was a legitimate end user) vote was disqualified.

in fairness to Mike, the beauty pageant winners and the best scholars are not necessarily the best teachers (and vice versa).

I once asked a friend at an ivy league school who was taking corporations at the same time as me (at a non ivy not top 10 school) about the business judgment rule and the friend said "what's that?" I asked if the professor discussed the Delaware code--answer, no. This friend was commented that there were some "great professors" (big names) and other great professors (excellent teachers) a the school.

and people often teach where they do for geographic/family reasons rather than prestige. I know several profs who are never leaving their schools for a higher ranked school because they are settled with their family where they are.

but the fact of the matter is USNWL does not factor average faculty rating by students into its magic formula. If it did at 40-50%, wow would there be a sea of change from scholarship to the classroom. But that is never going to happen.

It is so ironic how Mike Livingston uses his/her Yale credentials to support his/her claim that Rutgers is better than Yale in teaching law students.

Define "fancy." Fancy is not just a random label attached to random schools. What does Harvard, Yale, and Stanford have in common?

"Teaching is much better." You mean you enjoy teaching at Rutgers better than teaching at Yale? Or are you trying to tell me that Rutgers provides better teaching?

If you are trying to say Rutger's professors are more sociable, willing to help, better at explaining things clearly, and better role models in life, you might be right. I've seen some fantastic teachers.

But at the same time, the talent pool of the professors at Rutgers is on average sub-par. You have one or two top notch tenured guys who just wants to stay there. You have handful of tenure-tracks who are clearly using the school as a stepping stone. But vast majority of the faculty is composed of people that couldn't make it at "fancier" schools.

Also, students are as good as their peers. At top schools, students tend to have healty competitive mind. At places like Rutgers, I don't think that's the norm. Rutgers students might THINK that they are competitive, hard-working, or determined to succeed.. but from my 30+ years of observation, those are subjective and nonverifiable claims.

BTW, nice Yale name dropping. LOL! You went to Yale so everyone should respect you? Nice try! We know why you mentioned Yale.

There's a very, very small gap between private school and public schools, especially in the legal field. To that, I think we'll all agree- I've seen amazing, hungry litigators come out of the University of Texas and University of Florida, particularly.

But there's a very, very, very large gap between prestigious private schools and third and fourth tier private schools, and that's a fundamental difference. And NYLJ ranking their own tax LL.M program better than the well funded, well educated, well taught LL.M at NYU is dishonest. If they want the best LL.M program, they should do what Florida did- don't try and game the rankings, put your money where your mouth is, and make your program better!

Florida now has what is widely considered the 2nd or 3rd best graduate tax program in the country, and they got there the old fashioned way, by having rigorous standards for incoming students and developing their faculty over time. I think it's the model Denver is pushing towards- I've been very impressed with the teams they've sent to tax competitions over the last few years.

1. I'm not sure how "selective" NYU is, either. In twenty years I had one student rejected there. He couldn't spell.

2. I don't think you need an alternate ranking system to see that the fanciest schools are not always the best. It depends what you are looking for. I went to Yale, and I teach at Rutgers, and I don't have the slightest doubt the teaching is much better at the latter; I wouldn't be shocked if the scholarship is, too.

""The assumption that "the most prestigious is also the best" is false in numerous areas.""

So...do you propose a different ranking system? Are you proposing what I think you are proposing, i.e. the least prestigious is the best. Your comment does have that tone, although you are probably gonna weasel out of that.

Regardless of what you think, if the word "best" to describe a school is to have any meaning, it should take into factors such as selectivity of the program, faculty qualification, and quality post-graduation career prospect.

NYLS JD program, let alone the LL.M. program, is NOT selective by any means. I am not 100% sure but anyone with a 3.2 GPA and 155 LSAT can get in. Correct me if I am wrong. The faculty at NYLS are 2nd rate, i.e. they couldn't make it at other schools. Finally, I am not even sure if a single biglaw is coming to NYLS LL.M. OCI.

I just saw that St. Johns and NYLS ran an ad on NY law journal.

Must be a typo.

Honestly, how many people who read this blog knew that NYLS had a graduate tax program (current/former faculty and students excluded)?

Does anyone know when NYLS started offering an LL.M. in taxation? (just curious)

Because perception is everything in the legal field. Partners like having prestigious associates- it's part of the reason supreme court clerks are so prized.

It doesn't mean that the most prestigious schools turn out the best lawyers, by any means, but in a profession where education prepares you for very little and on-the-job training is important, prestige gets your foot in the door. NYLJ's survey is dishonest in the worst way- like NALP numbers- it was designed so that NYLS can say "Best ranked graduate tax program in New York!" in their brochures, with the source of that ranking written in one-point-font on the back page, under the copyright notice.

But maybe there's something to that. The assumption that "the most prestigious is also the best" is false in numerous areas. Why should we assume that it's always true for law schools?