It is only natural that U.S. companies have increased hiring overseas during the last decade. After all, the world economy has become increasingly integrated. There are huge overseas markets to be exploited. There are pools of low-cost labor to be tapped. So the steady upward trend shown in Figure 1 should come as no surprise. Between 1999 and 2008, employment by majority-owned foreign affiliates of U.S. parent corporations grew from 7.8 million jobs to 10.1 million. That's an increase of about 2.4 million jobs, or 30%. 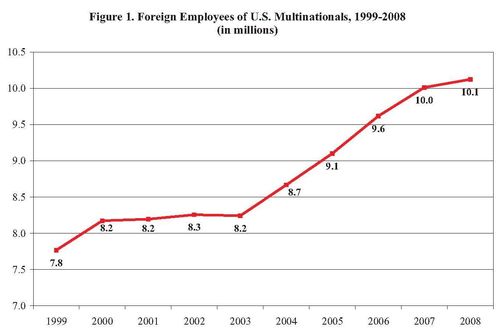 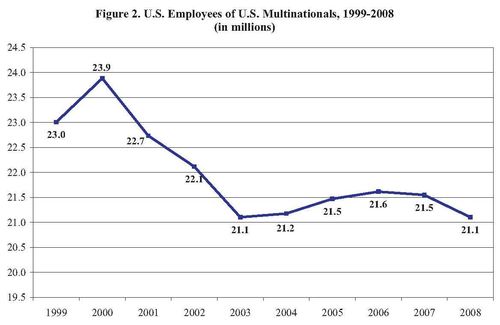 Your analysis is interesting but half-baked. The same source (Bureau of Economic Analysis) which gives the foreign employment numbers, also gives a break-up of employment by industry and the net sales and profits of majority-owned foreign affiliates of US corporations.

If they have a choice, why would a multinational hire an employee here? In convoluted, indecipherable detail, the Government tells multinationals how to hire, compensate and fire employees, the conditions under which they work, the benefits that must and can be provided them, and imposes excise taxes on employee salaries. Of course, the fed also regulates all the activities you wish to undertake through said employees. Then you have to submit costly reports, and host time consuming audits, for the foregoing.

The U.S. immigration and education systems target social justice, not a multinational's needs.

To fund all that unhelpful activity, the Federal government skims a third of your corporate income (Second highest in the developed world!).