In 1961, the average full-time student at a four-year college in the United States studied about twenty-four hours per week, while his modern counterpart puts in only fourteen hours per week. Students now study less than half as much as universities claim to require. This dramatic decline in study time occurred for students from all demographic subgroups, for students who worked and those who did not, within every major, and at four-year colleges of every type, degree structure, and level of selectivity. Most of the decline predates the innovations in technology that are most relevant to education and thus was not driven by such changes. The most plausible explanation for these findings, we conclude, is that standards have fallen at postsecondary institutions in the United States. 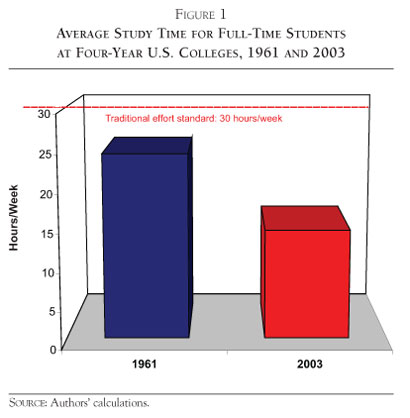 Listed below are links to weblogs that reference College Students Don't Study Enough:

I remember reading a review that showed that more and more 4-year degrees are being completed in 5 (or more!) years instead. That would be an equally plausible reason for study-per-week going down, since you are extending the number of weeks but doing the same amount of total work.

Efficiency and a lighter class load are the answers. My first time through the system a full load was 18-20 quarter credits, now 15 is considered full time. The real kicker however is the efficiency brought by technology. I do research and look things up in seconds on an Ipad that I used to spend hours in the library looking up. I print the information I need rather than copying it from a reference. I wish it had been like this in 85, when I did it the first time.

What amazing statistical crap. As CatoRenasci says above "love to see this data across different disciplines or colleges".

Is this just an exercise in "Things were harder back when I had to walk to school uphill in the snow."

Can part of the issue be attibuted to the everyone needs to go to college view?

I'm embarrassed for you that you published this

"The most plausible explanation for these findings, we conclude, is that standards have fallen at postsecondary institutions in the United States."

I can't speak for other degree programs, but for mine (computer science) a significant part of this reduction may be caused by the increased access to information, the speed increases in computing, etc. In the 1960's you had to take turns for computer time, all of your homework was on punch cards and if you screwed up you went to the back of the line. Compare this to today where my iPhone has more computing power than a 1960's mainframe, I don't have to go to the library to do homework and I can churn out several hundred lines of code a day (and 1 line of modern-language programming = several lines of 1960's programming). And this was all when I graduated in '99, I've been an employed software engineer for 11+ years.

Not to speak against the narrative, but some amount of this decrease is probably tied to our increased ability (via technology and study habits) to find and filter information.

I'd love to see this data across different disciplines or colleges, say, engineering versus education or liberal arts and sciences.

It's interesting that as the price of the credential has risen dramatically in real terms, the amount of learning it represents has declined almost as precipitously. Once, the student invested a lot of effort and his parents invested some money and the student ended up with knowledge and the credential that more or less reflected the knowledge. Now, the parents invest a lot of money, the student invests little effort, and she ends up with a credential that is hollow - it represents far less knowledge than it did in 1970.

I always coasted under the national averages (back in the '70s) but I attributed that to the fact I was in a major, chemistry, for which I had a natural apptitude and liked. Perhaps this is all because guidance counselors have become much better at getting students to go where they are most capable... Nah! Who am I kidding... LOL

I'd like to see that broken down by major. My guess is that some majors are declining much less than others. It's not easy to get through a physics class without putting in the hours doing problems and learning equations.

Evidence in support of college students being rational actors, I suppose. A college degree these days is barely worth the paper on which it's printed. Though I guess you could say the causal arrow goes the other direction (i.e., a college degree is worth less because it's easier to skate by because of the lower standards).