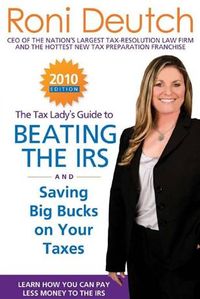 California Attorney General (and Democratic gubernatorial candidate) Jerry Brown has filed a $34 million lawsuit against Roni Deutch, claiming that the self-described "Tax Lady" has swindled thousands of customers with tax problems with the IRS.  From the press release:

Attorney General Edmund G. Brown Jr. today filed a $34 million lawsuit against television's "Tax Lady Roni Deutch" for orchestrating a "heartless scheme" that swindled thousands of people facing serious and expensive tax collection problems with the IRS. "Tax Lady Roni Deutch is engaged in a heartless scheme that swindled people with tax problems," Brown said. "She promises to significantly reduce their IRS tax debts, but instead preys on their vulnerability, taking large up-front payments but providing little or no help in lowering their tax bills."

Several months ago the state of Texas brought a similar action against Taxmasters which regularly advertises on cable TV.

This explains some of the IRS attitude toward practitioners discussed in Kip Dellinger's Tax Notes essay, posted here yesterday. But it's interesting that it is the state, not the federal government, trying to protect consumers here. The consumers, of course, are people who owe federal tax, and IRS is apparently content to allow them the best inadequate representation they can find.