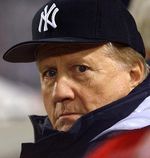 Did George Steinbrenner save his heirs millions by dying in 2010?

Forbes recently estimated the Yankees owner’s net worth at $1.1 billion, largely from the YES network.  The New York Yankees, which he acquired in 1973 for $10 million, are now worth $1.6 billion but are 95% leveraged due to debt from the new Yankee Stadium, according to Forbes.

Because Steinbrenner died in a year when there is no federal estate tax, he  potentially saved his heirs a 55% estate tax on his assets — or a tax bill of about $600 million. The 55%  tax takes effect on January 1, 2011. If Steinbrenner had died in 2009 when the estate tax rate was 45%, his estate tax bill might have been nearer $500 million.

Steinbrenner is survived by his wife, Joan, two sons, and two daughters, plus two sisters and several grandchildren. ...

This year’s lapse potentially provides huge windfalls for the very wealthy, like Steinbrenner. Other billionaires who have died this year include Houston energy magnate Dan [Duncan] and real estate developer Walter Shorenstein.

Of course, since Steinbrenner is survived by his wife, it is likely that the marital deduction would have shielded the estate from tax had he died in 2009 or 2011.  For more, see The Costs of Estate Tax Dithering. (Hat Tip: Peter Parlapiano.)

Listed below are links to weblogs that reference WSJ: By Dying in 2010, Did George Steinbrenner Save His Family $600m in Estate Tax?:

Will this be the test case when Congress imposes the estate tax retroactively sometime later this year?

It makes me wonder who he left the team to. Who now owns the Yankees? If he left it to his wife, his kids will probably eventually owe tax on it. If his kids now own it, however, they get it tax-free. Interesting.

Steinbrenner took himself out of the game to help the team.