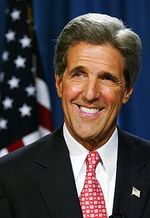 Sen. John Kerry, who has repeatedly voted to raise taxes while in Congress, dodged a whopping six-figure state tax bill on his new multimillion-dollar yacht by mooring her in Newport, R.I.

But instead of berthing the vessel in Nantucket, where the senator summers with the missus, Teresa Heinz, Isabel’s hailing port is listed as “Newport” on her stern.

Could the reason be that the Ocean State repealed its Boat Sales and Use Tax back in 1993, making the tiny state to the south a haven -- like the Cayman Islands, Bermuda and Nassau -- for tax-skirting luxury yacht owners?

Listed below are links to weblogs that reference Sen. John Kerry Skips Town on Sails Tax:

as much as everyone i know hates john kerry he could have simply claimed the boat as a second home in another state. case closed.
i would expect he has several second homes already.....
hope he doesn't die this year and excape the death tax too !!!!

It should be noted that the Boston Herald article doesn't include any information about Kerry's actual use of the boat in RI or Massachusetts (which could be simply because Kerry bought the boat too recently to have used it) or the actual amount of time he typically spends annually in Nantucket. The Herald just implies there is no legitimate reason for berthing the boat anywhere but Nantucket. I trust the Herald will keep the public informed of any visits the Isabel makes to Massachusetts.

Regarding his wife's investments in tax-exempt bonds: it has long been observed that investors in exempt securities pay an implicit tax by earning a lower rate of return than they could receive on taxable bonds. This benefits the taxpayers of the issuing states and cities whose taxes ultimately pay the interest on the bonds. On December 10, 2008, this blog had an entry on a paper titled "Taxes on Tax-Exempt Bonds," including this quote: "Implicit tax rates priced in the cross section of municipal bonds are approximately two to three times as high as statutory income tax rates, with implicit tax rates close to 100% using retail trades and above 70% for interdealer trades."

I don't fault John Kerry for his tax planning techniques. His wife doesn't like paying taxes either (well, who does) which is why she invests so heavily in tax-exempt bonds.

I do blame both of them, however, for being hypocritical, do-as-I-say-not-as-I-do, multi-million dollar luxe yacht liberals.

What has Sen. Kerry paid for his swift boat?

Diogenes, I think your comment was directed at small mod, not Woody??

I wonder if Geithner owns a boat?

You're right in how the law can be changed, though your suggestion it is a problem is misleading. The law has a different problem from the problem that the law addressed.

Why do you think the law is written the way it is? RI is light on taxes/fees and requires registration for any vessel that plies the water of RI or docks for more than 90 days. MA has no such waters use requirement; their only requirements for registration are that it has an on board motor and isn't documented by the Coast Guard.

The law was written with structural exemptions for people such as John Kerry, by people like John Kerry. The argument that they are just doing what everyone else does, doesn't address the fact that not everyone wrote the law.

I wouldn't be at all surprised if the reason RI has the rule about RI water usage is to prevent peons across the country from registering in RI to avoid the laws that demand they be taxed in their own states.

The peons? They can eat the taxes their elites decree and like it.

With all due respect, it is NOT their right to impose taxes on the rest of us that they then dodge. Charles Rangel would, in other contexts, have the same "right" to flout NY's idiotic rent control system to his own advantage as anyone else - except HE is (i) a vocal proponent of rent control and similar measures, and (ii) regularly votes for similar legislation.

Whatever pejoratives you may choose to throw at him, Newt's "Contract with America" contained one nugget of pure gold - the provision that required Congress to abide by all laws they impose on others. Would that this provision had been broader in effect, and more rigidly enforced.

Does ANYONE believe that 90% of the legislation these statist @$$holes pass would get enacted if THEY had to live with the results????????????

Well, Massachusetts could fix the problem simply by changing the way their personal property tax operates to include boats owned by Mass residents, period. While it looks bad for those tax-and-spenders to be willing to spend and unwilling to be taxed, it's as much their right as anyone else's.

Taxes and fines are just for other people. Here's another "fine" example from a Senate candidate:

On a Tuesday morning five years ago, Summerwind, a three-story, 145-foot luxury yacht, maneuvered above the celebrated barrier reef that lines the coast of Belize.

There it dropped anchor -- and plunged into controversy over severe damage to a coral reef system officially recognized by the United Nations as one of the world's most magnificent and irreplaceable treasures.

``The guys from the area told me they were beside the boat before it dropped anchor, and they were yelling and waving their hands, shouting, `No! No, don't drop here,' '' recounted Melanie McField, a marine scientist with the Smithsonian Institution who surveyed the reef soon after the incident. ``It was bad. There was a lot of damage.''

...The case remains officially open, Alegria said in a phone interview, and if Greene or the Summerwind's then-captain returns to Belize they face fines of up to $1.87 million, given the amount of reef damage caused. ....