More on the Tax Advantages of LeBron James' Move to Miami 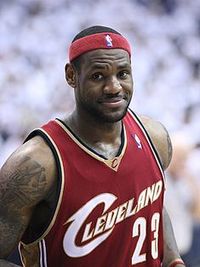 We come not to praise or bury LeBron James, but only to note that by moving to Miami he's going to save a bundle on taxes. ... Florida has no income tax. The rate in Akron, Ohio is a little over 7%.

Mr. James figures to earn close to $100 million in salary over five seasons in Miami. According to an analysis by Richard Vedder, an economist at Ohio University, Mr. James's net present value tax savings on his salary are between $6 million and $8 million by living in Miami versus his home town of Akron. Professional athletes do have to pay other state taxes for the dates they play in visiting team arenas, but most of Mr. James's considerable endorsement income would be taxed at Florida rates.

The tax comparisons looked even worse for two other teams in the LeBron bidding, the New York Knicks and New Jersey Nets. ... While LeBron's departure got extraordinary media attention, it is hardly unique. In the early 1990s, Ohio was the home of 43 Fortune 500 companies. Twenty years later the number is 24. Census Bureau data show that from 2004-2008 Ohio saw a net outmigration of $6 billion of income and some 97,000 taxpayers. Even Ohio's famously liberal Senator, the late Howard Metzenbaum, moved to Florida late in his life to reduce his estate taxes.

We feel for Cleveland fans, but maybe they should allocate some of their wrath to the state politicians who keep driving high-income individuals and their businesses to financially sunnier climes.

Listed below are links to weblogs that reference More on the Tax Advantages of LeBron James' Move to Miami:

This does assume that LeBron moves his residency to Florida, instead of maintaining residency in Ohio. He's got a pretty sweet house here, and I don't know if his girlfriend/kids want to move to Florida. The social situation does matter here; don't a lot of NBA players live in one place and play in another state?

How much did he save by not joining the Knicks in NYC?

There seems to be a certain death spiral associated with government reaching a certain critical size.

At some point it starts to actively obstruct the wealth creation which itself depends on. Sadly, the response to economic decline is all to often, "Government needs to do more!" which just feeds the spiral. Yet, people in those areas just can't seem to see it.

Back in the early 90's Apple relocated its tech support from California to Austin, TX. Everyone got a 15% pay cut but they came way out ahead in take home pay and standard of living. A lot of Californians were amazed that they could actually afford a house (with front and back yards!) on a mere middle-class income. I knew back then that California was in for a rough time eventually.

Why would any one choose to start a small business in Cleveland or in Ohio? Anyone smart enough to start and successfully run a small business has enough brains to get a better paying, less aggravating job in local or state government.

Tax Prof I have a question. What will be the impact on those making less than 50K come January 1st, 2011 regarding income, capital gains, dividend income, rental income, and income from other sources?