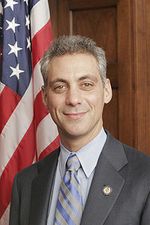 Following up on my prior posts: L.A. Times, The Ties That Bind. Remember Rahm Emanuel's Rent-Free D.C. Apartment? The Owner: A BP Adviser:

Shortly after Obama's happy inaugural, eyebrows rose slightly upon word that, as a House member, Emanuel had lived the last five years rent-free in a D.C. apartment of Democratic colleague Rep. Rosa DeLauro of Connecticut and her husband, Stanley Greenberg.

For an ordinary American, that would likely raise some obvious tax liability questions. But like Emanuel, the guy overseeing the IRS now is another Obama insider, Tim Geithner, who had his own outstanding tax problems but skated through confirmation anyway by the Democratic-controlled Congress. ...

Greenberg's consulting firm was a prime architect of BP's recent rebranding drive as a green petroleum company, down to green signs and the slogan "Beyond Petroleum."

According to published reports, GCS received hundreds of thousands of dollars in political polling contracts in recent years from the Democratic Congressional Campaign Committee.

Probably just a crazy coincidence. But you'll never guess who was the chairman of that Democratic Congressional Campaign Committee dispensing those huge polling contracts to his kindly rent-free landlord.

Listed below are links to weblogs that reference BP Indirectly Funded Rahm Emanuel's Rent-Free (and Tax-Free) Use of Capitol Hill Townhouse:

I stay overnight at my girl friends house a couple of nights a week. I thinking I should delcare that on my taxes next year.

The "Indirctly" part has been dropped by the wacko internet conspiracy theory crowd. The reason I found this site is because they are saying out there - "he lived rent free" on BP.

Think about this, if we expect people to be completely free of any contact with anyone that may influence a vote then you are living in a dream world. While we should limit it, when we dig deep enough no one is clean.

I don't understand this rule at all. I've been living rent free in my parent's house ever since graduating last year. Am I supposed to pay taxes on this? I don't know the exact statute/reg but it seems ridiculous.

Israel, where Rahm Emanuel served in the IDF, "Indirectly Funded Rahm Emanuel's Rent-Free (and Tax-Free) Use of Capitol Hill Townhouse"

Every pro - war, pro Bankster Lobby managing K-Street Kiddie Brothels, for the pleasure of those who serve in congress, "Indirectly Funded Rahm Emanuel's Rent-Free (and Tax-Free) Use of Capitol Hill Townhouse"

Spare me - is this mainstream TV or the internet?

That's pretty indirect! But what concerns me is the overriding impression that there is one set of rules for the elite, another for everyone else. This perception, even if at times exaggerated, is enormously damaging to the cause of democracy--and tax compliance.