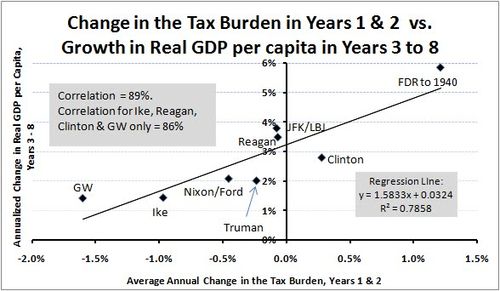 I tried providing an explanation:

Michael Kanell and I advanced several theories in but the one I think makes the most sense is that changes in the tax burden are a sign of the degree to which an administration enforces laws and regulations.

The graph below shows the change in the tax burden in the first two years of each 8 year administration on the horizontal axis, and the annualized change in real private investment per capita in the remaining six years along the vertical axis [click on graph to enlarge]. 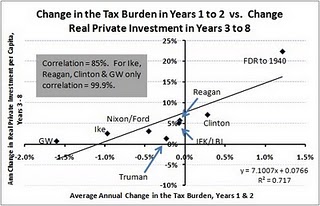 So let me revisit once more the explanation that Michael Kanell and I put forward in and which is consistent with the data presented in both graphs above. Administrations that cut the tax burden tended to do so mostly by reducing enforcement of tax laws and regulations. But people who don’t believe in enforcing tax laws are also not particularly fond of most other forms of rules and regulations, preferring a laissez faire “pro-business” government in all walks of life. Sure, there may well be many private sector winners when the government allows a free-for-all. However, as the costs of exploiting loopholes, breaking laws and creating externalities falls relative to the costs of doing productive things, fewer truly useful productive activities take place, and that kills growth.

Listed below are links to weblogs that reference Raising Taxes Leads to More Economic Growth and Private Investment:

A follow up to my point number 3. I was assuming you were talking about impending increases in the marginal tax rate.

But please, if you want to test what I wrote, stick to what I wrote, not what you interpret that I wrote. And my test says nothing about the marginal rate. Nothing.

1. I've gone to great pains to point out in my posts (something that the current excerpt doesn't make clear) that I do not believe that increasing tax burdens increases growth. Instead, it seems that increased tax burdens are correlated with something that in turn has a much larger and positive effect on economic growth than whatever negative effect might exist (if any, at the ranges we've observed since 1929) from the higher tax burdens.
2. I assume by "rate" you mean marginal rate, which has little to do with the tax burden in the end except in the very short term. I've taken to putting this at the bottom of all of my posts (not excerpted here):
"Note also… if it’s not obvious, this post deals with the tax burden, the share of GDP going to the Federal government, and not marginal tax rates. Please do not insist on commenting on a topic unrelated to this post."
3. "Of course, we are about to put this hypothesis to the test in 2011." Well, you might test your hypothesis. As noted in item 2, a change in marginal tax rates bears very little relationship to my hypothesis.
4. Given where we are (on either marginal rates or tax burdens), jumping to a corner solution based on recent Greek experience makes no sense. You can jump to the opposite corner solution with Somalia or even Saudi Arabia, and you won't have to limit yourself to the outcome of the last few years to make an argument.

As someone has pointed out before, if simply increasing taxes leads to greater economic growth, then we can theoretically raise the rate to 100% and see economic growth go through the roof. We all know that that is false on its face (otherwise, Greece would be paradise).

Of course, we are about to put this hypothesis to the test in 2011. I believe the hypothesis will fail.

The first rule of interpreting regression analysis is, "correlation does not imply causation." I plan to start using this result as exhibit A for why that rule is taught to undergraduates.

Talk about voodoo economics. Why let's double taxes and we'll all get rich! Triple them if you want more!

Why focus on who was President rather than what political party controlled Congress and the budget...when we used to have one.

1. Assuming Presidential administrations have different economic policies, and given that eight year terms have been more common than terms of other lengths since 1929 (the first year for which official data is available), it doesn't make sense to pick anything other than an eight year term.
2. I happen to believe that Presidents have an effect on the economy, and I've done a lot of work that shows that they do. (Some of it collected at www.presimetrics.com)

Sigh. If you go to Angry Bear and look through the archives for Kimel's postings on presidents in office versus national prosperity, you will find that objections like yours, plus many others, have been dealt with over and over again over the past four years or so. He's run the numbers for eight year, four year, one year, whatever durations -- a year before or a year after taking office, with or without WWII, the whole gamut. In addition, he has run the numbers (government numbers, remember) for presidents with or without the support of their own party in Congress and the Senate.

What I find most interesting is that the numbers are so unambiguously clear in so many data sets -- since FDR, the country did best under Democratic presidents, and did worst under Republicans. (Pre-Depression numbers are often scanty or nonexistent for these measures.)

In his posts, Kimel provides links to all the raw data he is working with and generally provides the numbers which underlie his graphs.

Don't just fire off your volleys with blank shells. It doesn't make you look good.

Paul, certainly nobody is ever going to accuse you of not exploring all sides of the issue!

I can only assume that the authors selected eight-year cycles because others cycle lengths didn't 'prove' their prior beliefs. Does anyone really believe this stuff?