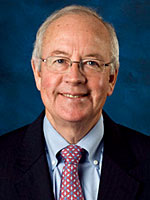 Following up on my prior post on Pepperdine Dean Ken Starr's decision to  become President of Baylor University:  in this week's Chronicle of Higher Education, Love Him or Hate Him, Ken Starr Will Try to Unify Baylor:

The name Ken Starr conjures images of Whitewater or Monica Lewinsky, and many people think of him as a conservative ideologue bent on bringing down President Bill Clinton. But watch Mr. Starr here on the campus of Pepperdine University's School of Law, where he is the dean, and you'll find something very different. In person, Mr. Starr is humble, soft-spoken. He has a calm, even voice that would be a natural fit on public radio, and it's difficult to imagine him ever raising it. The polarizing former independent counsel is also disarmingly friendly.

And he has made some unlikely admirers. One of them is Erwin Chemerinsky, founding dean of the University of California's Irvine School of Law. The two men have known each other for about 20 years. They stand on opposite sides of the political spectrum, and have debated publicly. "Anyone who knows Ken will tell you he's one of the most gracious people you will ever meet," Mr. Chemerinsky says. "You can't dislike him, no matter how much you might disagree with him."

But for those who know him only through the lens of the media, the image of the aggressive prosecutor from the late 90s has stuck. Considering that reputation, it shocked many when Baylor University announced he would be its next president, starting June 1.

Choosing a president is important for a college under any circumstances, but more than usual was riding on this search. Baylor, a Baptist university in Waco, Tex., has seen its last two presidents leave under a cloud. The university has had more than its share of scandals in recent years. And there are unresolved tensions on the campus, many concerning Baylor's strategic plan to be a more prestigious research institution while enhancing its Christian identity. ...

Mr. Starr's tenure as dean at Pepperdine Law School, his position since 2004, is widely considered a great success. Pepperdine has darted up the U.S. News & World Report ranking of law schools, climbing from No. 99 in 2005 to No. 55 in 2010. It's an achievement any number of faculty members and administrators there take with a grain of salt—many of them are no fans of the rankings—but one that clearly matters to some of their students.

Listed below are links to weblogs that reference More on Pepperdine Dean Ken Starr's Departure for Baylor Presidency:

He was highly successful at Pepperdine. You have to give him credit for turning a tier 3 school into a solid tier 1/2 school.